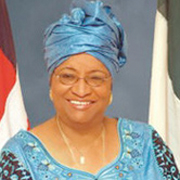 Candidate presented by: Ambassador David A. Straz, Jr., Member of the Board of Trustees

Her Excellency Ellen Johnson Sirleaf, President of the Republic of Liberia, is the first female democratically elected head of state in Africa, having been inaugurated on January 16, 2006. She is internationally known as a leading promoter of peace, justice, and democratic rule. Known as the “Iron Lady” for her strong will and determination as well as for her personal integrity, she is committed to ethical reform for the people of Liberia.

In her efforts to achieve justice and human rights for her fellow citizens, she spent more than a year in jail at the hands of the military dictatorship of General Samuel Doe and had her life threatened by former President Charles Taylor. Her Excellency campaigned relentlessly for Taylor’s removal from office and played an active and supportive role in the transitional government as Liberia prepared for elections in October 2005. Her election victory was formally announced by the Liberian Elections Commission on November 23, 2005.

Her Excellency was the Chairperson of the Governance Reform Commission of the National Transitional Government of Liberia before becoming the standard bearer of the Unity Party of Liberia in 2004.

Her experience inspired her to dedicate her professional life to ensuring that the Liberian people have the opportunity to pursue lives of dignity and freedom. As President she has sought debt amelioration and aid from the international community. In addition, she established a Truth and Reconciliation Committee to probe corruption and heal ethnic tensions. She is also a strong advocate of free compulsory education.

These accomplishments build on Her Excellency’s record of public, private, and non-governmental organization leadership. Prior to her service as President, she served as Minister of Finance, President of the Liberia Bank for Economic Development and Investment, Vice President of Citicorp, Vice President of the HSBC Equator Bank, Senior Loan Officer of the World Bank, and founder and Chief Executive Officer of Kormah Development Corporation. She is also the founder of Measuagoon, a nonprofit organization that supports community development and education for girls.

After being born and raised in Liberia, Her Excellency came to the United States as a young woman to continue her education, earning a master’s degree in Public Administration from Harvard University’s Kennedy School of Government.

She has received numerous awards for her professional accomplishments and public service, including the Ralph Bunche International Leadership Award, the Franklin D. Roosevelt Freedom of Speech Award, Grand Commander of the Star of African Redemption of Liberia, and the 2006 International Republican Institute Freedom Award.

Her Excellency was one of seven internationally eminent persons designated by the Organization of African Unity to investigate the Rwanda genocide in 1999, one of five Commission Chairs for the Inter-Congolese Dialogue in 2002, one of the two international experts selected by the United Nations Development Fund for Women to investigate and report on the effect of conflict on women and women’s roles in peace building in 2002, and Chairperson of the Open Society Initiative for West Africa from 2000 to 2003. She is a member of the Soros Foundation Network and is also a Visiting Professor of Governance at the Ghana Institute of Management and Public Administration.

A devoted mother and grandmother, Her Excellency has four sons and nine grandchildren. She is a member of the United Methodist Church.

Because of her meritorious public service on behalf of the people of Liberia and her commitment to peace and justice, Reverend President, I hereby recommend Her Excellency Ellen Johnson Sirleaf for the Marquette degree of Doctor of Laws, honoris causa.