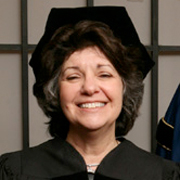 Honorary Degree: Doctor of Letters
Conferred on Eleonore A. Stump

Eleonore A. Stump is the Robert J. Henle, S.J., Professor of Philosophy at Saint Louis University. She is one of the leading scholars in medieval philosophy in the United States, and the chair of her department describes her as, “one of the foremost in the English-speaking world.” Professor Stump is a leader in bringing the clarity of modern analytic philosophy to bear on the rich treasures of medieval philosophy and much of her scholarship has focused upon questions relating to the existence and nature of God and the problem of evil. The 15 books that she has authored, edited, or co-edited, along with her almost 100 articles, have enriched the philosophical world and placed Christian thinkers everywhere in her debt.

The honors she has received bespeak the high respect in which her scholarly peers hold her. She recently delivered the prestigious Wilde Lecture at Oxford University where she spoke on “The Problem of Evil: What We Care About.” In 2003 she delivered the Gifford Lectures at Saint Andrews University in Scotland where she spoke on “Wandering in Darkness: Narrative and the Problem of Evil,” which is being published by Oxford University Press. Professor Stump has held visiting professorships at the Wolfgang Goethe University in Frankfurt, at the Pontifical Gregorian University in Rome, at Wuhan University, Wuhan, China, and was a visiting fellow at Oriel College, Oxford. Clearly her reputation as a scholar is internationally recognized. She has also served as the president of the Central Division of the American Philosophical Association, the Society of Christian Scholars, and the American Catholic Philosophical Association.

Like all great professors, Professor Stump has used her knowledge to inform her teaching. Her excellence as a teacher was recognized when she received the 2005 Robert Foster Cherry Award for Great Teaching from Baylor University.

In her life as an academic Eleonore Stump has exemplified the ideals of excellence in scholarship and in teaching that Marquette has traditionally emphasized, and she has combined them with a deep commitment to the Christian faith. A Jesuit colleague has said of her, “She’s had a transforming effect on the department and Saint Louis University not only through scholarship, but also through her companionship and faith.”

Because of her excellence in research and teaching in the field of philosophy and her commitment and service to Catholic Jesuit education, Reverend President, I hereby recommend Eleonore A. Stump for the Marquette University Degree of Doctor of Letters, honoris causa.