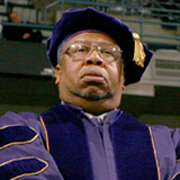 Candidate presented by: Dr. Jean Hossenlopp, Associate Professor and chair of the Department of Chemistry

Dr. Isiah Warner is a distinguished scholar recognized for research in the field of analytical chemistry and creative leadership in the development of supportive environments for training students, particularly minority students, in science, technology, engineering, and mathematics. He is currently Vice Chancellor for Strategic Initiatives and Philip W. West Professor of Analytical and Environmental Chemistry at Louisiana State University. Dr. Warner also is a Boyd Professor of the Louisiana State University system and in 2002 was awarded a Howard Hughes Medical Institute Professorship.

Professor Warner's research in the field of analytical separations has led to the development and application of improved methodologies (chemical, mathematical, and instrumental) for studies of complex chemical systems. He is the author of more than 250 refereed journal articles to date and has six patents issued or pending. Dr. Warner has received recognition for his research accomplishments with awards from professional organizations, including the New York Society for Applied Spectroscopy, the Eastern Analytical Symposium, and the American Microchemical Society. In 2002 he was elected to be a Fellow of the American Association for the Advancement of Science (AAAS).

Dr. Warner's research program has provided training for graduate students and postdoctoral associates who now hold leadership positions in academic, national laboratory, and industrial settings around the world. He has worked tirelessly to establish opportunities for students to achieve excellence in all of their endeavors and as a result of his effort, Louisiana State University leads the nation in graduating African American doctoral students in chemistry. His success as a mentor of the next generation of scientists has been recognized with a number of prestigious awards, including the Presidential Award for Excellence in Science, Mathematics, and Engineering Mentoring; the AAAS Lifetime Mentor Award; and the American Chemical Society Award for Encouraging Disadvantaged Students into Careers in the Chemical Sciences. The Marquette community has also benefited from his scholarship, including when he served as the Ralph Metcalfe Chair in 1988.

Because of his distinguished record of scholarly accomplishment, success as an educator and research mentor, and visionary leadership in creating an academic environment where students and faculty can flourish, Isiah M. Warner is commended for the Marquette degree of Doctor of Science, honoris causa.