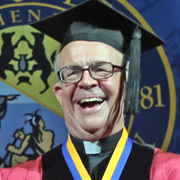 Candidate presented by Mr. John F. Ferraro, Chair of the Board of Trustees

Robert A. Wild, S.J., served as the 22nd President of Marquette University from 1996 to 2011 and from 2013 to 2014. Under his leadership, Marquette improved academic quality, increased enrollment, enhanced partnerships with the City of Milwaukee and community groups and, in so doing, elevated the university’s reputation. In 2005 Marquette completed the most successful comprehensive campaign in the history of the university with a total of $357 million, largely due to Father Wild’s efforts.

During his tenure, alumni, parents, and friends invested more than $800 million, with $375 million in new construction and campus renovations. External research awards more than doubled, the value of the endowment increased 130 percent, and applications to the freshman class increased from 5,400 to 22,000.

At the heart of this success was Father Wild’s dedication to students. Holding firm to Marquette’s founding mission of educating first-generation college students, he was a champion for increasing access. With more than $200 million raised for endowed and immediate impact scholarships during his tenure and a student body comprised of more than 20 percent first-generation students, his legacy is the students. As Father Wild said, “It is not just about how much more our students and graduates can be, but how much more the world can be through our graduates.”

In 2009 Marquette celebrated the Centennial of Women as the first Catholic university in the world to enroll women alongside men in undergraduate programs. During Father Wild’s presidency Marquette bestowed its highest honor, the Père Marquette Discovery Award, on Archbishop Desmond Tutu, who opposed apartheid and promoted healing in South Africa, and on the Little Rock Nine, who courageously integrated Little Rock Central High School in 1957.

From 1992 to 1996 Father Wild served as President of the Weston Jesuit School of Theology (now the Boston College School of Theology and Ministry), a graduate school which trains both clergy and laity for leadership roles in the Catholic Church. From 1985 to 1991 he served as Provincial Superior of the Chicago Province of the Society of Jesus, directing the activities of Jesuits in northern Illinois, Indiana, Kentucky, and southwestern Ohio.

A biblical scholar and author of two books and numerous scholarly articles, Father Wild served as a faculty member in the Department of Theology at Marquette from 1975 to 1984. A native of Chicago, Father Wild holds a doctoral degree in New Testament and Christian origins from Harvard University, a master’s degree in classical languages, a bachelor’s degree in Latin from Loyola University Chicago, and a licentiate in theology from the Jesuit School of Theology in Chicago. He has held visiting professorships at Loyola University Chicago and the Pontifical Biblical Institute in Rome.

Father Wild began his teaching career at St. Xavier High School in Cincinnati, where he taught Latin, Greek, and speech and debate from 1964 to 1967. He entered the Society of Jesus in 1957 and was ordained to the priesthood in 1970.

Because of his unwavering commitment to Catholic, Jesuit education and his transformational role in Marquette University’s history, President Lovell, I hereby recommend Robert A. Wild of the Society of Jesus for the Marquette University degree of Doctor of Letters, honoris causa.