"Unlike disagreement and conflict, persistent and courageous dialogue does not make headlines, but quietly helps the world to live much better than we imagine."

The Marquette Civic Dialogues Program works to foster deliberation about the pressing issues facing our world today, prepare students to be citizens with purpose, and advance scholarship on the individual and collective benefits of civic dialogue. Through our programming and research, we encourage students to "Be the Difference" by engaging differences in political thought and lived experience.

We launched our program in Fall 2021 with the generous support of donors. In our inaugural year, we held 6 campuswide events that drew over 140 participants. This year, we've expanded our programming with 9 scheduled events this semester alone (280 participants and counting)! We continue to engage alumni through outreach and programming. Most importantly, we are strengthening civic relationships on campus and beyond. 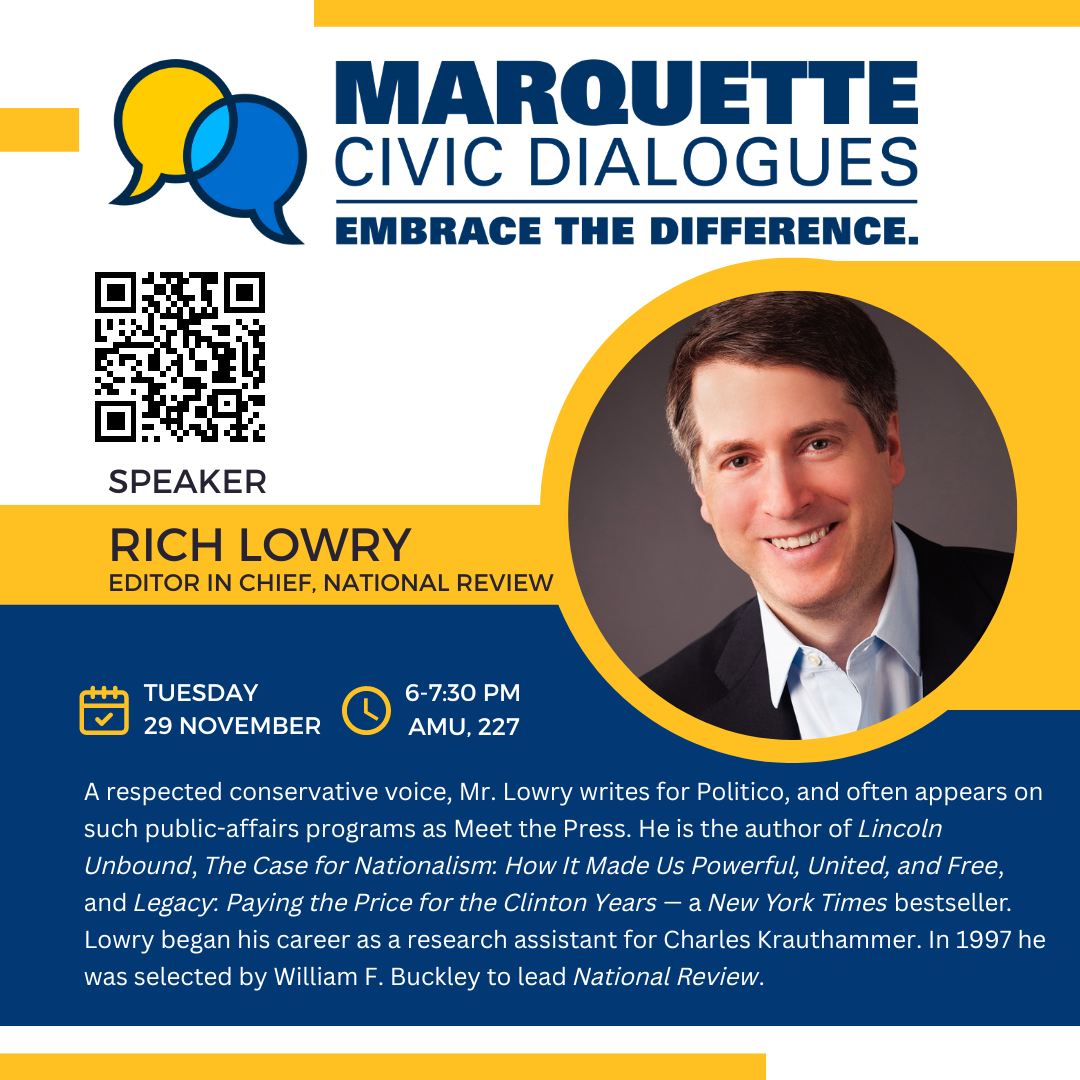 Rich Lowry is the editor in chief of National Review. A respected conservative voice, Mr. Lowry writes for Politico, and often appears on such public-affairs programs as Meet the Press. He is the author of Lincoln Unbound, The Case for Nationalism: How It Made Us Powerful, United, and Free, and Legacy: Paying the Price for the Clinton Years — a New York Times bestseller.

Lowry began his career as a research assistant for Charles Krauthammer. In 1997 he was selected by William F. Buckley to lead National Review. 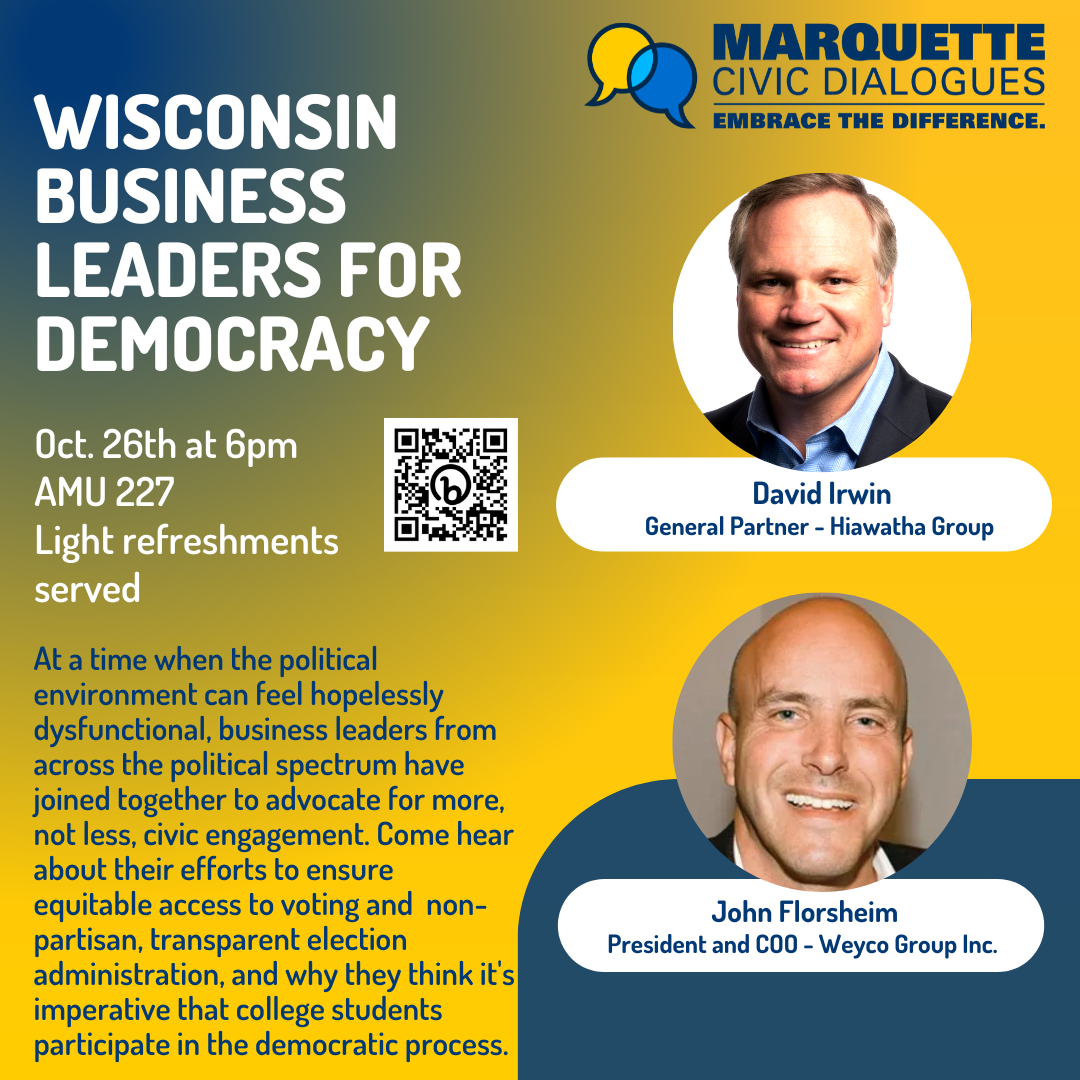 At a time when the political environment can feel hopelessly dysfunctional, Wisconsin business leaders from across the political spectrum have joined together to advocate for more, not less, civic engagement. Come hear about their efforts to ensure equitable access to voting, non-partisan, transparent election policy and administration, and unbiased representation. Why do they believe it is their responsibility to support free, fair, and regular elections, and why do they think it's imperative that college students participate in the democratic process?

David Irwin is General Partner of Hiawatha Group, which holds interests in private software and technology services companies in which Mr. Irwin plays an active operating or advisory role. From 2002 to 2019 he served as a corporate development executive, sales leader, and business President for Wisconsin-based Fiserv, Inc, a Fortune 100 technology company primarily serving the financial industry. Part of his work with Fiserv involved establishing operations in India and Latin America and growing them to over 3,000 professionals. Earlier, Mr. Irwin worked in management consulting for Boston Consulting Group (BCG) and as an entrepreneur with the NetCommerce Company, a VC-backed insurance software venture that he co-founded with two partners. Mr. Irwin’s interest in civic engagement originated from spending three years of his youth in France during the Cold War and developing a sense of America’s unique place in the world. From 2002 to 2007 he was a Term Member of the Council on Foreign Relations in New York and an organizer of the Council’s 2005 mission to India. He earned a BA at Dartmouth College, majoring in Economics and minoring in Government, and an MBA from the Wharton School of Business. He lives in Elm Grove, WI with his wife (a former Elm Grove Village Trustee) and daughter. The three of them wish their college freshman son would call home more often.

John Florsheim is President and COO of Weyco Group, a distributor and marketer of footwear brands with 250 employees based in Glendale. Weyco is a family oriented public company which sells its products globally and its portfolio of brands include Florsheim, Bogs, Stacy Adams and Nunn Bush. Prior to joining Weyco, Mr. Florsheim worked at M&M Mars in marketing. He is currently on the board of the United Way of Greater Milwaukee and Waukesha Counties. Mr. Florsheim has always had a strong interest in American political history. His current involvement in promoting civic engagement stems from his concern over the growing political divide within the country. He earned a BA in history from Brown University and an MBA from the Yale School of Management. He lives in Shorewood with his wife and they are the proud parents of three grown children. 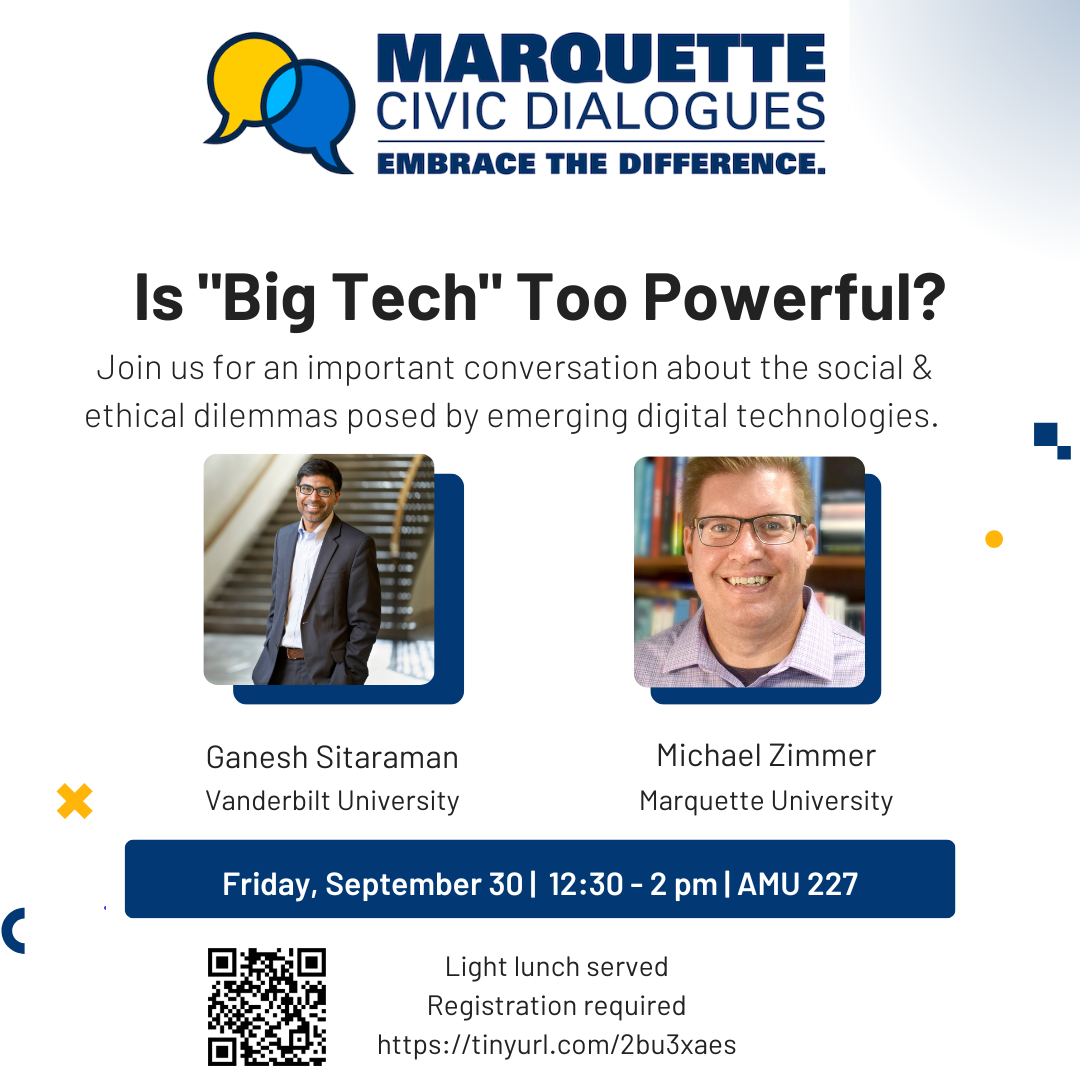 Debates about the power of big tech have grown in recent years. Has the rise of big tech undermined economic competitiveness and democracy? Should we reform how we regulate tech platforms? Does content moderation threaten free speech? What should we do to protect privacy on the internet? Is there a national security case for breaking up big tech? The Civic Dialogues Program will host Professor Ganesh Sitaraman (Vanderbilt University) and Professor Michael Zimmer (Marquette University) to discuss these issues and more.

Professor Sitaraman holds the New York Alumni Chancellor's Chair in Law at Vanderbilt Law School. He is the author of several books, including The Great Democracy: How to Fix Our Politics, Unrig the Economy, and Unite America (2019), The Crisis of the Middle-Class Constitution: Why Economic Inequality Threatens Our Republic (2017), and The Counterinsurgent's Constitution: Law in the Age of Small Wars (2012). A public member of the Administrative Conference of the United States, Professor Sitaraman has also been a longtime advisor to Elizabeth Warren. He has been profiled in The New York Times and Politico for his work at the nexus of politics and ideas.

Dr. Michael Zimmer is a privacy and data ethics scholar whose work focuses on digital privacy & surveillance, the ethics of big data, internet research ethics, and the broader social & ethical dimensions of emerging digital technologies. Dr. Zimmer is an Associate Professor in the Department of Computer Science at Marquette University, and Director of the Center for Data, Ethics, and Society. He is an Affiliated Fellow at the Information Society Project at Yale Law School, as well as the Northwestern Mutual Data Science Institute. 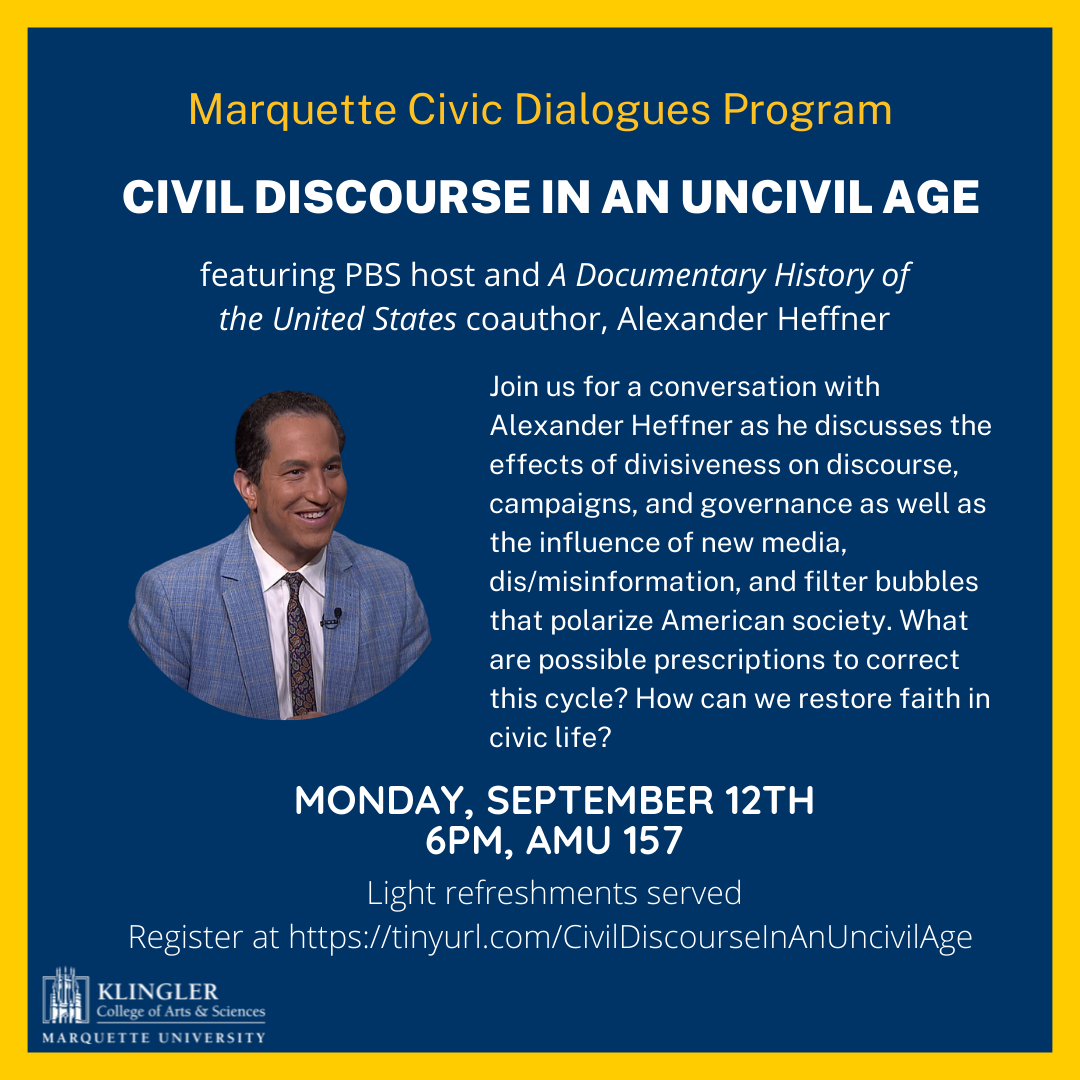 The Marquette Civic Dialogues Program is thrilled to welcome Alexander Heffner, host of PBS’ The Open Mind and coauthor of A Documentary History of the United States, to campus. Heffner will discuss the effects of divisiveness on discourse, campaigns, and governance as well as the influence of new media, dis/misinformation, and filter bubbles that polarize American society. What are possible prescriptions to correct this cycle? How can our social footprint translate into constructive instead of destructive behavior? How can citizens, government, and the press restore faith in civic life and the integrity of public policy?

Alexander is host of The Open Mind on PBS and coauthor of bestselling A Documentary History of the United States (Penguin, 2022). He has covered American culture, politics, and civic life since the 2008 presidential campaign. He is recipient of Johns Hopkins University’s Agora Institute Fellowship, University of Denver’s Anvil of Freedom Award, Franklin Pierce University’s Fitzwater Medallion for Leadership in Public Communication, and Yale University’s Poynter Fellowship in Journalism. He is profiled in The Wrap, Mediaite, The Washington Post, The Des Moines Register, Christian Science Monitor, Variety, Medium, and on MSNBC, C-SPAN, NPR, CNN, ABC and the BBC. His writing appears in USA TODAY, WIRED, TIME, The Wall Street Journal, The Independent, NYT's Room for Debate, Boston Globe, and Philadelphia Inquirer, among other publications.

What should we do to promote economic opportunity and prosperity?
A civic dialogue with Betsey Stevenson and Michael Strain

Click here to watch a video recording of this event. 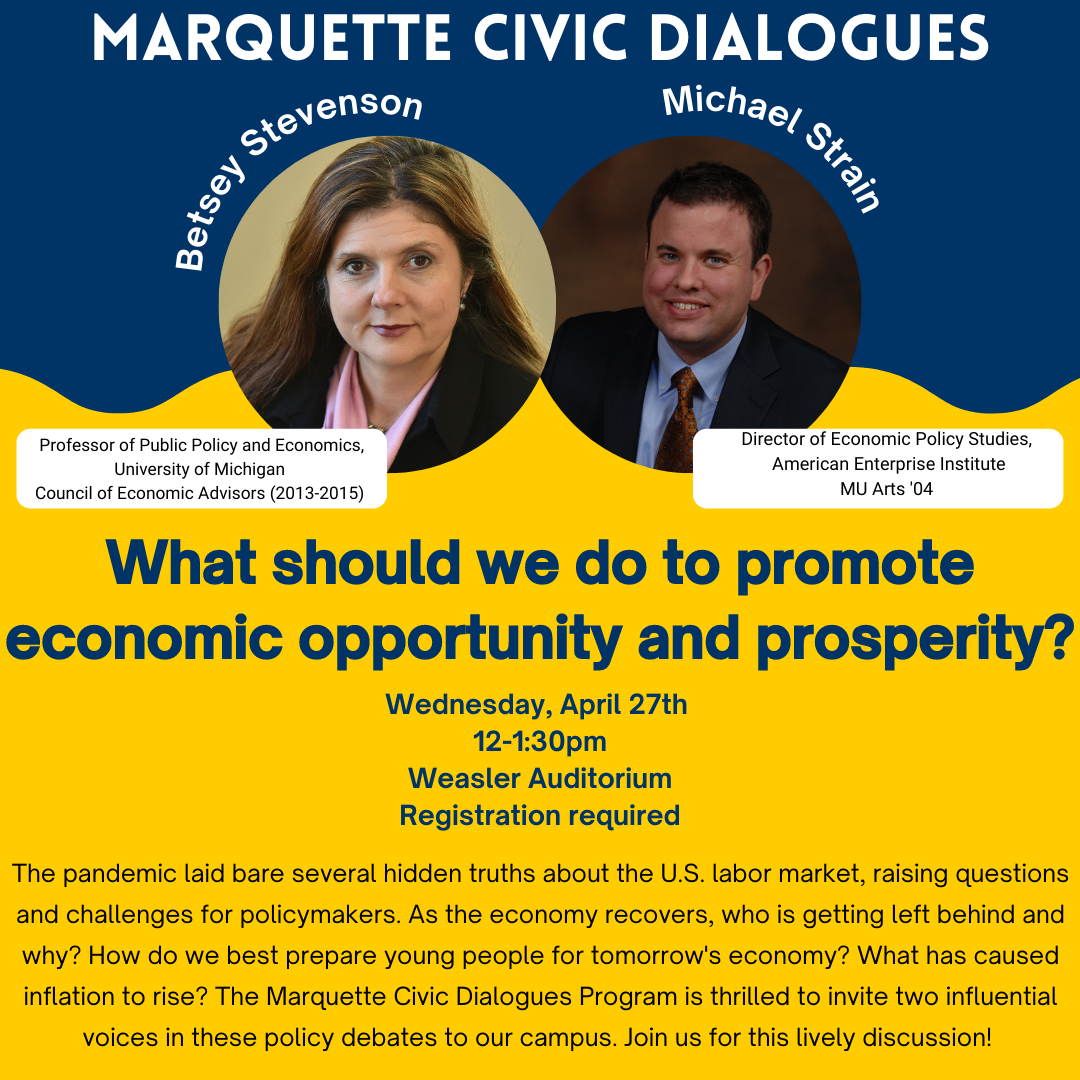 What should we do to promote economic opportunity and prosperity? Wednesday, April 27th, 12-1:30pm Weasler Auditorium. Registration required.

The pandemic laid bare several hidden truths about the U.S. labor market, raising questions and challenges for policymakers. As the economy recovers, who is getting left behind and why? How do we best prepare young people for tomorrow's economy? What has caused inflation to rise? The Marquette Civic Dialogues Program is thrilled to invite two influential voices in these policy debates to our campus. Join us for this lively discussion!

TO DONATE TO CIVIC DIALOGUES

Thank you for your support!