Who is St. Ignatius of Loyola?

St. Ignatius of Loyola was born in 1491, the youngest son of a Basque nobleman. He served as a page and then as a courtier at the courts of leading Spanish noblemen. But, in 1521 a French army invaded Spain and attacked Pamplona near Castle Loyola. Ignatius led the defense until he was hit by a a canon ball which smashed his legs. The French took him to Castle Loyola where he spent nine months in convalescence reading devotional books that changed his outlook on life. He determined to make a pilgrimage to Jerusalem, but on the way spent many months in prayer at Manresa, Spain. As his prayer deepened, he kept notes. After returning from Jerusalem, he realized he needed more education if he was to carry out his new dream – a life of serving God and helping souls. He studied Latin at Barcelona. Then, after a short time at Spain’s two leading universities, he studied at the University of Paris from 1528 to 1535.

At Paris, he gathered six other students who vowed to work for God in Jerusalem. But, war between Venice and the Turks made that impossible, so they put themselves at the service of Pope Paul III in 1538. Gradually Loyola and his companions decided to start a new religious order, the Society of Jesus, which soon gained the nickname of Jesuits. Paul III approved the order in 1540. The companions elected Ignatius Loyola their superior general and commissioned him to write the Jesuit Constitutions. They gave retreats based on Ignatius’s Manresa notes, which were updated and published as The Spiritual Exercises in 1548. That book has been translated into dozens of languages in some 5,000 editions and is the basis of Ignatian Spirituality. The Jesuits opened colleges which quickly spread not only throughout Catholic Europe, but from India to Peru. When Ignatius died in 1556, Jesuit missionaries were already working in Asia, Africa and Latin America. Ignatius Loyola was canonized in 1622. 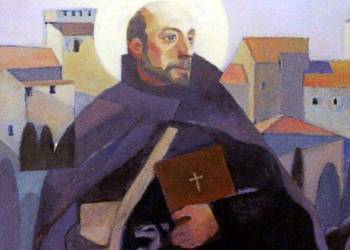