Who is Peter Faber?

Saint Peter Faber (the anglicized form of his French name, Pierre Favre) was one of the original companions of Ignatius who founded the Society of Jesus, a religious order of men commonly known as the Jesuits. The Faber Center for Ignatian Spirituality draws its inspiration from him because of his gentle manner and because he was recognized by Ignatius as the most skilled of the early Jesuits in directing the Spiritual Exercises. He preached at missions and gave the Exercises to people in many different countries of Europe.

Peter was born in the village of Villaret, Savoy, France on April 13, 1506 to a relatively poor farming family. As a young boy, he shepherded his father’s flock of sheep in the Alpine pastures. He had no education until he was ten years old when he convinced his father to allow him to attend a small school operated by a parish priest. At age eleven, he studied at La Roche and continued there until 1525 when he began his studies at the University of Paris. At the University of Paris, he lived at College de Sainte-Barbe with a roommate, Francis Xavier, and studied philosophy and theology. In 1529, Francis and Peter accepted another roommate, an older student, Ignatius of Loyola. Inspired by Ignatius, Peter Faber was ordained a priest in 1534. Ignatius directed him in the Spiritual Exercises before his ordination.

The original companions of Ignatius who formed the Society of Jesus, initially resolved to serve as missionaries in Jerusalem. However, because of an outbreak of war, they were unable to accomplish their original plan. As a result they traveled to Rome and put themselves at the disposal of the pope. Faber and James Laynez, another of the first Jesuits, were appointed to assist Cardinal Ennio Filanardi in reforming both the clergy and laity in Parma. He was also sent to accompany Dr. Pedro Ortiz, Charles V’s representative, to the colloquy between Catholics and Protestants in Worms, Germany. He became increasingly well known for his direction of the Spiritual Exercises and conducted missions in Portugal and Spain further opening those countries to more Jesuit activity. He was assigned to be a theologian at the Council of Trent. With the idea of visiting Ignatius, his friend and spiritual mentor before traveling to Trent, Peter Faber returned to Rome. The exhaustion from the extreme demands of his work and the hardship of his travels weakened him and he fell ill. On August 1, 1544 at the age of thirty eight, while in the presence of Ignatius, he died. In 1872, Peter Faber was beatified by Pope Pius IX and on December 17, 2014 was raised to sainthood by Jesuit Pope Francis. 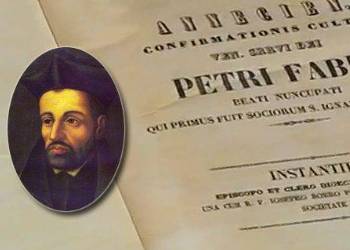