Q: What is the university doing to address the issues that participating (non-tenure track) faculty have raised?
A: This summer, Marquette leadership held several listening sessions and solicited feedback via an online form to hear directly from participating faculty and better understand how to improve their experience as valued members of the Marquette community. This feedback is directing the work to identify meaningful and lasting solutions to concerns about career stability, compensation, consistency and clarity of role expectations, and respect and voice on campus.

Q: How can participating faculty trust that senior leadership “gets it” and will meaningfully address their concerns?
A: The proof is in the work already underway by a dedicated task force of Marquette community members committed to improving the participating faculty experience. The task force recently presented recommendations to Acting Provost Ah Yun.

Q: I would like to have my voice heard on these matters. Who can I talk to?
A: Additional listening sessions are being scheduled for this fall. Please contact Julie Bach to let her know about your interest in participating (julie.bach@marquette.edu). Of course please also feel free to share your feedback with your department chair or dean. You may also share your input via the Your Voice section on this website.

Q: Would Marquette leadership support a vote on unionization?
A: Marquette leadership believes that our community is best served by working collaboratively and without a third party. That said, Marquette leadership has repeatedly stated that it will follow a lawful process that protects the rights of all parties, as defined by the National Labor Relations Act, should participating faculty decide they want to form a union.

Q: Why should participating faculty care if their colleagues want to unionize, even if they don’t?
A: Once the NLRB establishes which employees are in the collective bargaining unit, an election will be held to decide whether a majority of the voting employees want a union. If a union is certified, everyone in the designated bargaining unit will be subject to the terms of the contract that eventually will be negotiated between the union and the university. Individual employees cannot opt out of the union representation.

Q:  If participating faculty do not want a union, why should they vote?
A: In a union election, the decision to unionize or not is made by a simple majority of those who voted. In a hypothetical example, let’s assume 100 people are eligible to vote. Of those 100, only 20 people show up to vote and a simple majority vote “yes” to form a union. That means that 11 people will have determined the outcome for all 100. If we have a vote, everyone in the proposed bargaining unit will be impacted by the outcome. Therefore, it will be important that everyone has their vote count.

Q: What would it be like having a faculty union at Marquette?
A: In general, individual participating faculty members will no longer be able to negotiate directly with department chairs, program directors or deans on terms that are subject to the union contract, even if the individual faculty member did not vote for the union or join the union. In addition to surrendering the right to work directly with the university about their employment, participating faculty who choose to join the union will likely be required to pay an initiation fee and monthly dues. participating who choose not to join the union will still be represented by the union and subject to the collective bargaining agreement.

Q: How would unionization impact Marquette’s system of collaborative governance?
A: Unionized employees will not be represented within our governance system because only the union would have the exclusive right to bargain over employment terms. That means that the university could no longer make changes to compensation, work environment, etc. without first negotiating with the union.

Q: How are union contracts bargained?
A: The first contract typically takes 18-24 months to negotiate. From there, new contracts are typically negotiated every three to five years.

Q: What if a union is voted in, but participating faculty decide they no longer want one?
A. If a union is voted in, then it will remain in place for a minimum of 12 months. After that point, if members of the bargaining unit decide they no longer want a union, they may begin what is called a “decertification process.” A special election will be called, with a simple majority vote determining whether or not to decertify the union. Marquette, as the employer, has no role in the process and cannot provide any assistance to the bargaining unit’s efforts. 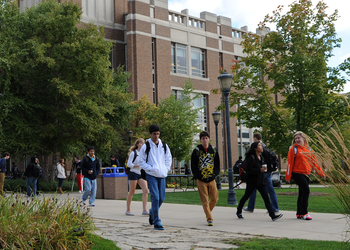