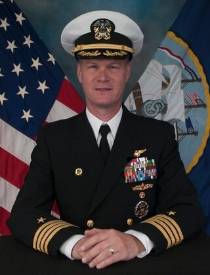 Captain Lonnie Appleget is a native of Celina, Ohio and enlisted in the Navy in 1987. Prior to receiving his commission, he served nine years as an Electrician’s Mate with sea tours aboard USS LaSalle (AGF 3), USS Hunley (AS 31), and USS George Washington (CVN 73), where he was selected for the Enlisted Education Advancement Program.

Captain Appleget was selected by the inaugural Seaman to Admiral Commissioning Program and attended OCS in Pensacola, Florida. In the fall of 1996 he reported to USS Shreveport (LPD 12), qualifying as a Surface Warfare Officer. During this tour he was selected for transition to aviation, and was designated a Naval Aviator in December 2000.

In 2006 he completed the educational requirements of the Seaman to Admiral Program, earning a Bachelor of Arts in Political Science from Jacksonville University. He holds master’s degrees in National Security Strategy from the Naval War College, National Security and Resourcing Strategy from the Dwight D. Eisenhower School for National Resource Strategy and an MBA in Finance from American Public University.

Aviation operational sea tours include the Vipers of Helicopter Anti-Submarine Squadron Light (HSL) 48 and the Swamp Foxes of HSL-44. He was also a Fleet Replacement Instructor with the Airwolves of HSL- 40. He was selected as the 2009 HSL-44 Officer of the Year and subsequently selected as the Commander, Helicopter Maritime Strike Wing U.S. Atlantic Fleet 2009 Officer of the Year, earning the Rear Admiral K.F. Delaney Leadership Award.

Ashore, he has served on the Joint Chiefs of Staff as Deputy Division Chief for Maintenance in the Joint Logistics Directorate (J4), and as Branch Head for Surface Radars, ASW and Aviation requirements on the staff of the Director, Surface Warfare (OPNAV N96).

CAPT Appleget commanded Helicopter Maritime Strike Squadron (HSM) 77 from February 2013 to July 2015, and was the executive officer for Pre-Commissioning Unit Tripoli (LHA 7) from April 2017 to January 2020. From April 2020 until June 2021, he served as the Chief of Staff for Carrier Strike Group
FIFTEEN.

In August 2021, CAPT Appleget reported as the professor of naval science and commanding officer of the Marquette University NROTC.