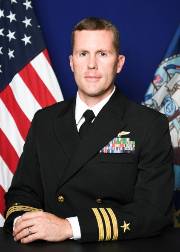 Commander Youngstrom is a native of Sister Bay, Wisconsin and graduated from Point Loma Nazarene University in 1998.  He entered the Navy through OCS in 1999 and immediately started flight school and selected west coast SH-60B’s.

Upon completion of flight school he attended SH-60B Fleet Replacement Squadron (FRS) training and in October of 2001, he was assigned to the “Battlecats” of HSL-43.  He deployed as a detachment Admin/Training officer and completed a 10 month WESTPAC attached to USS Mobile Bay and the Lincoln Battle Group.  Upon his return he was immediately assigned as a detachment Operations officer and deployed again on a 6 month SOUTHPAC/Counter Narcotics deployment in USS McKlusky.  After his second deployment he served as the squadron Training Officer.

Following his first fleet tour he became an instructor pilot with HSL-41 from November 2004 to January 2007.  At HSL-41 he was one of five “trusted agents” sent to VX-1 in Pax River, Md to assist in the Operational Evaluation and testing of the new MH-60R.  Following his return he was part of the original cadre of instructors on the MH-60R, allowing him to fly the first aircraft across the country from Pax River to San Diego.

In February 2007, he transferred to Navy Personnel Command (NPC) in Millington, Tennessee as the Helicopter Shore Detailer.  During this assignment he detailed all helicopter pilots leaving their first sea tour.  He also completed his EMBA through the Navy Post Graduate School distance learning program in September 2007.

After leaving NPC in October 2008 he reported to USS New Orleans (LPD-18) as the “Mini Boss”.  During the ships maiden deployment, a WESTPAC/Arabian gulf deployment, he fleeted up to “Air Boss” and promoted to Lieutenant Commander.  He received his OOD U/W, CDO U/W, TAO, CDO in-port, and Debark Control Officer qualifications.

Upon selection to Aviation Department Head, he left USS New Orleans in April 2010 and reported to HSL-51 in September 2010 as a detachment Office in Charge (OIC).  As a DET OIC he deployed in both USS Shiloh and USS Ford, as part of the USS George Washington battle group and single ship operations including direct support to Operation Tomodachi.  Following his OIC tour LCDR Youngstrom was the Operations Officer earning HSL-51 the Battle Efficiency award.

In June 2013, he transferred to US SOUTHERN Command in Miami Florida, as the Theater Security Cooperation Portfolio Manager and J8 Requirements Officer where he managed the financial resources of 12 theater engagement programs.

Commander Youngstrom is currently serving as an Associate Professor of Naval Science and Executive Officer of the Marquette University NROTC Unit.