Upon graduation, our Midshipmen commission either as Ensigns in the Navy or 2nd Lieutenants in the Marine Corps to begin their military careers. Midshipmen commissioning into the Marine Corps will proceed to The Basic School where they learn the art and science of leading Marines and receive their Military Occupational Specialty (MOS) assignments.  Naval officers begin a career based on service selection into the fields below. Click on the community title to visit the official Navy/Marine Corps website to learn more about each community, or click here to visit the NROTC website. 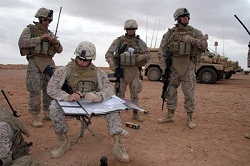 Marine officers have a wide variety of potential communities available including ground combat, logistics, aviation, artillery, and intelligence. However, as every is trained to be a riflemen first, and every Marine officer a rifle platoon leader. Each community involves specialize training completed after The Basic School. Please visit the official Marine Corps Officer website for more details. 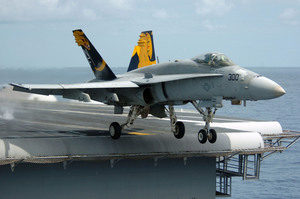 After successfully completing the ASTB and passing the flight physical, Midshipmen await selection as either a pilot ora naval flight officer (NFO).  After commissioning, new Ensigns begin an extensive series of training schools, beginning with basic aviation education at NAS Pensacola. After primary school, the students divide for fixed wing or rotary wing aircraft training, and then continue to split for more specialized training.  Upon completion of flight training, naval aviators are assigned to a fleet replacement squadron, receive their wings, and train to operate a specific aircraft.

Upon graduation, Midshipmen will begin the nuclear power training pipeline. The first stop is Naval Nuclear Power School (NNPS) located in Charleston, SC, a 24-week graduate-level course of study that provides a foundation of knowledge in topics such as differential equations, thermodynamics, and reactor dynamics. Following this is Advanced Nuclear Operator course at the Nuclear Power Training Unit (NPTU) in Charleston, SC or Ballston Spa, NY. NPTU is a 26-week phase that provides hands-on, operational training of a nuclear reactor. The third phase is Submarine Officer Basic Course (SOBC) located in Groton, CT, a 12-week course where officers learn about submarine operations, such as safety, damage control, seamanship, and the responsibilities of leading a submarine crew. An officer is then assign to their first submarine. Once he/she has completed a rigorous qualification process while on the submarine, an officer will be authorized to wear the Submarine Warfare Device (golden dolphins).

Upon receiving a service selection for Surface Warfare, Midshipmen will enter the training pipeline to become a Surface Warfare Officer (SWO). SWOs are Navy officers whose training and primary duties focus on the operation of Navy surface ships at sea and the management of various shipboard systems, which vary from being in charge of weapon systems to specific electronics. SWOs can be on a variety of ships including aircraft carriers, cruisers, or frigates. The ultimate goal of most SWOs is to be in command of a Navy surface ship. Later in a SWO’s career, they become a department head, which leads to becoming the Executive Officer and eventually the Commanding Officer of that ship. Within a SWO’s first tour, their main goal is to become qualified as the Officer of the Deck thereby earning your SWO pin.

Midshipmen interested in SEALs or Explosive Ordinance Disposal (EOD) start the process during their junior year of college. Midshipmen must complete the Physical Screening Test (PST) and get selected for a SEAL or EOD cruise.

SEAL candidates begin their training in San Diego, California. The first test for a SEAL officer is the three week Basic Orientation, which prepares the candidate for Basic Underwater Demolition/SEAL training (BUD/S). BUD/S consists of three, seven week phases: basic conditioning, combat diving, and land warfare training. After BUD/S, candidates must complete the SEAL Qualification Training (SQT), which prepares SEAL candidates for integration with a SEAL platoon. Before the SEAL candidate officially becomes a SEAL, the candidate must complete SERE School and parachuting qualifications. Once all these steps have been completed, candidates will officially become SEAL officers and will get to report to their SEAL platoon. 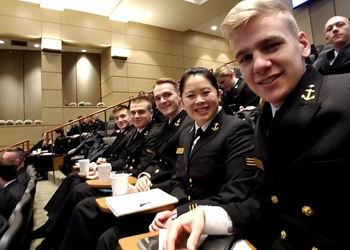