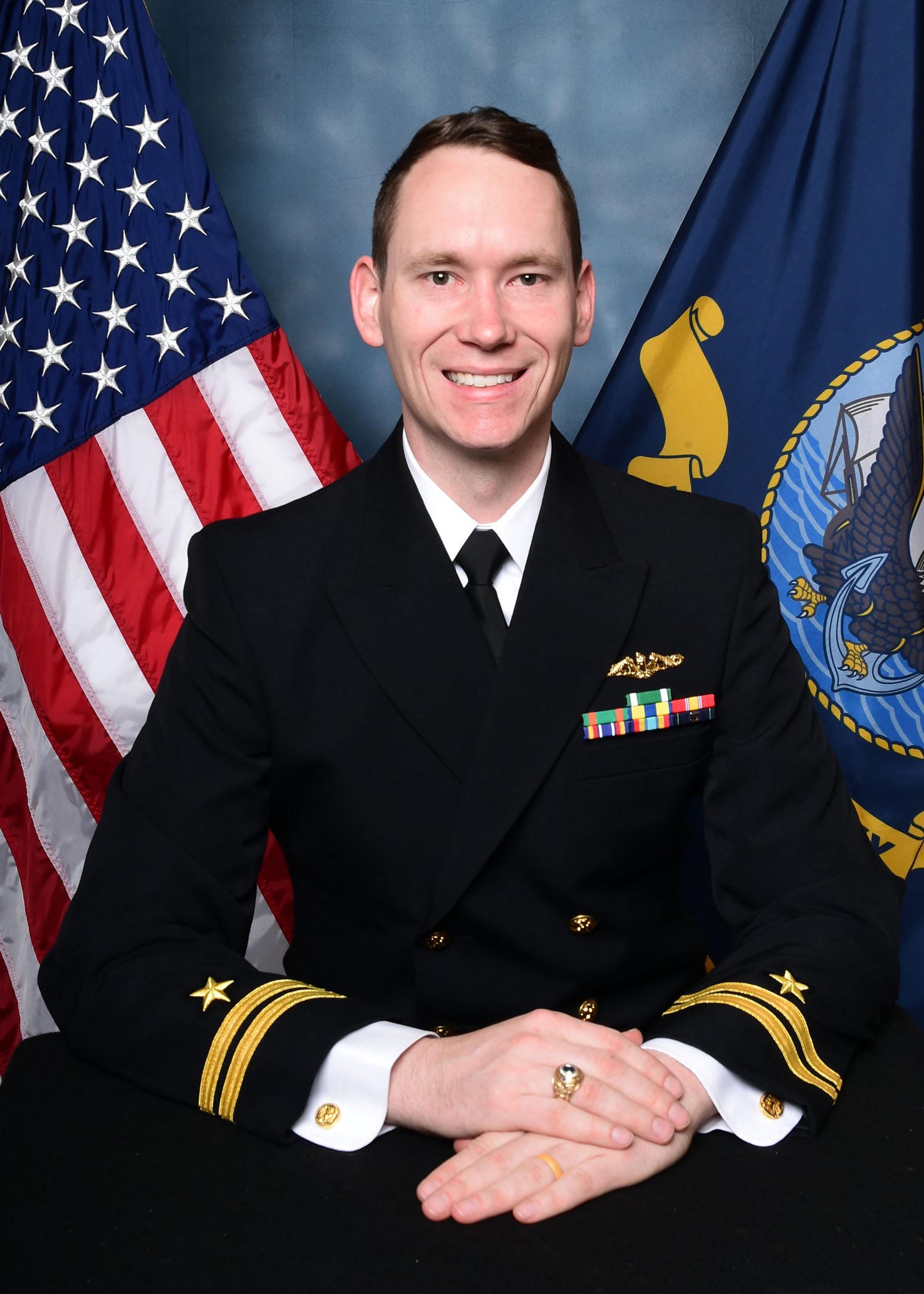 Lieutenant Eric Fugleberg hails from Portland, North Dakota and graduated from the United States Naval Academy in 2014 with a B.S. in Systems Engineering (Honors).

LT Fugleberg immediately attended graduate school at the Massachusetts Institute of Technology as part of the Immediate Graduate Education Program (IGEP) and earned a M.S. in Nuclear Science and Engineering.

After finishing his initial training, LT Fugleberg reported in March of 2018 to USS CHICAGO (SSN 721), stationed in Pearl Harbor, HI. During his time onboard, he served as the Reactor Control Assistant, the Information Warfare Officer, and the Operational Safety Officer. LT Fugleberg completed a Drydock Selected Restricted Availability (DSRA) in 2019 and one Western Pacific (WESTPAC) deployment in 2021 with CHICAGO. He was selected as the Submarine Squadron Seven LCDR Mush Morton Warfighter of the Year for 2020.

Lieutenant Fugleberg reported in April 2021 and is currently serving as an Assistant Professor of Naval Science, the Nuclear Power Officer and Submarine representative, and the 2/C advisor of the Marquette University NROTC Unit. 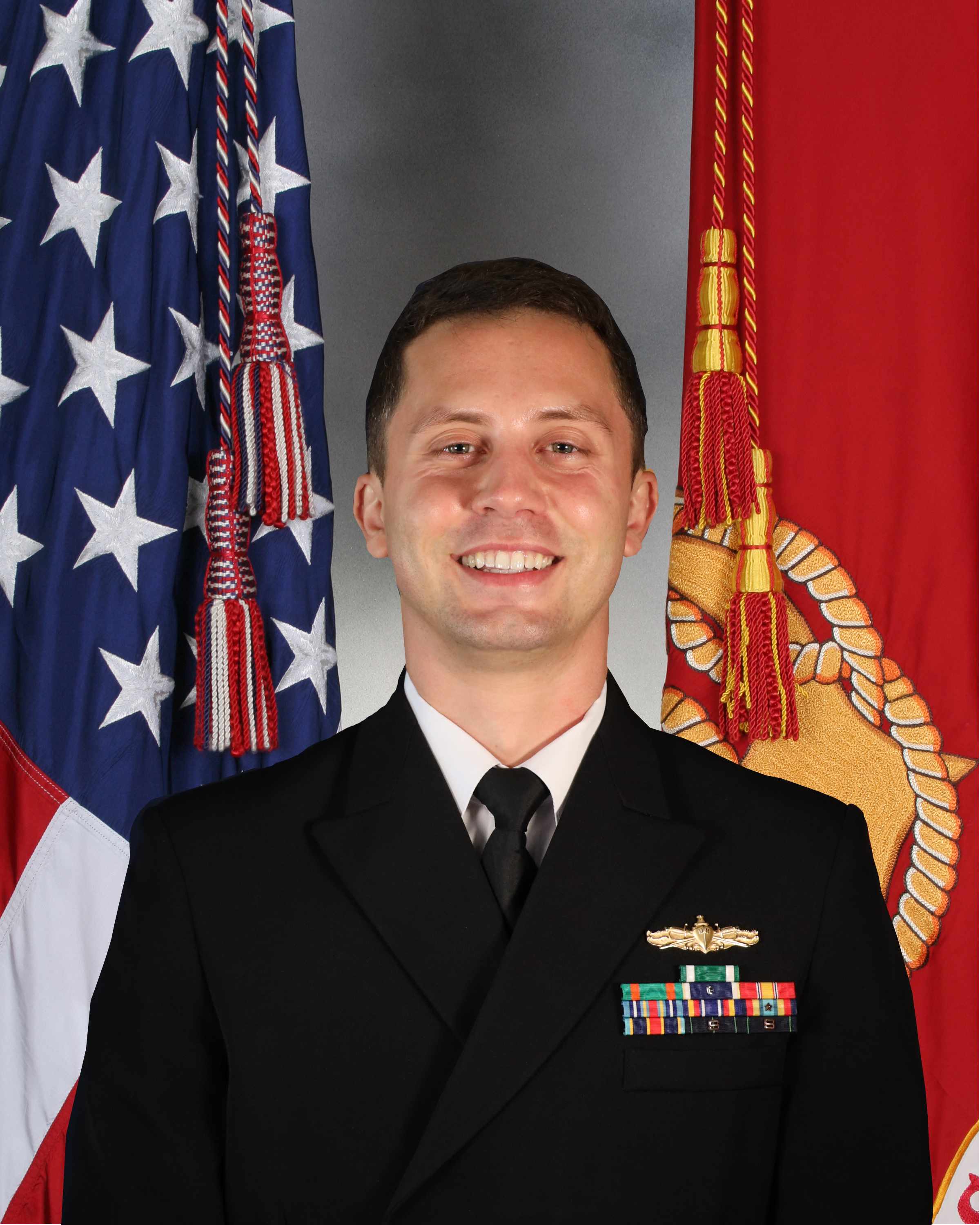 Lieutenant Zachary Henry hails from Kansas City, Missouri and graduated from the University of Missouri with a Bachelor of Arts in Political Science and a Minor in Sociology. He commissioned through Officer Candidate School in October of 2016.

Lieutenant Henry reported to the Pre-Commissioning Unit PORTLAND in San Diego, CA as the First Division Officer. In September 2017 he met the ship in Pascagoula, MS in preparation for the ship’s commissioning as USS PORTLAND (LPD 27) in December 2017. After commissioning she conducted her sail around through the Gulf of Mexico, Caribbean Sea, Panama Canal, and Eastern Pacific Ocean and in April of 2018 sailed to her official Commissioning Ceremony in Portland, OR. Lieutenant Henry then served as the Electronic Warfare Officer onboard until the end of his tour in December 2019.

In May 2020, Lieutenant Henry reported to the USS SQUALL (PC 7), forward deployed to Bahrain, as the Operations Officer and Navigator. USS Squall conducted operations in the Arabian Gulf, Gulf of Oman, and the Indian Ocean and was the winner of the 2021 Battle Effectiveness Award. Lieutenant Henry won the 2022 Junior Officer Ship Handler of the Year in Bahrain. In March 2022, USS SQUALL (PC 7) was decommissioned in Bahrain.

In April 2022, LT Henry reported to Marquette University’s Naval ROTC program as an Assistant Professor of Naval Science, the Surface Warfare representative on staff, and the Third-Class Midshipmen Adviser.

Lieutenant Henry has been awarded the Navy Commendation Medal, the Navy Achievement Medal, and various unit, campaign, and service awards. 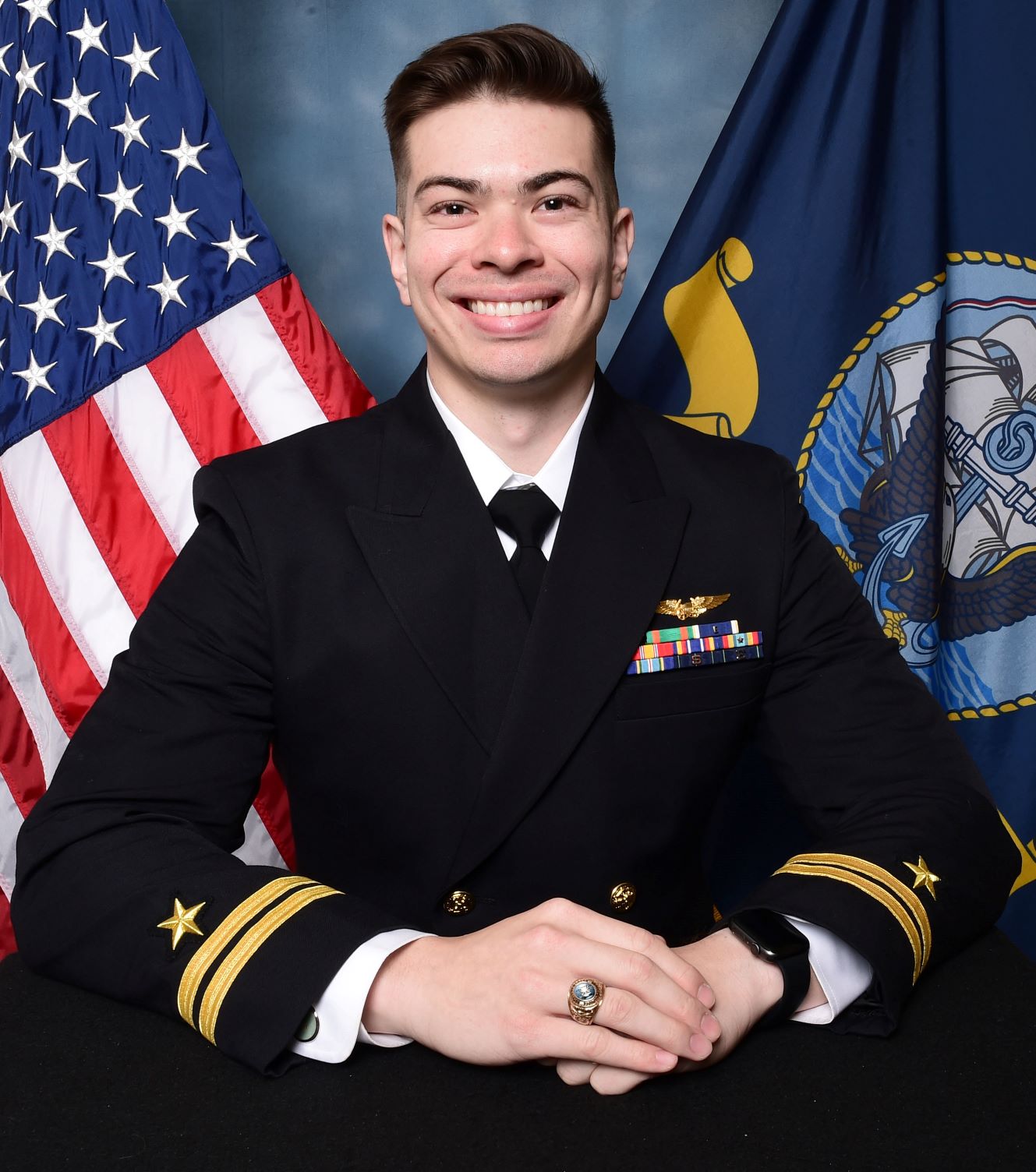 Lieutenant Jonathan Kappel hails from Brookfield, WI and graduated from the United States Naval Academy in 2014 with a B.S. in Economics.

LT Kappel began flight school at Naval Air Station (NAS) Pensacola, FL in the summer of 2014 where he selected to fly in the P-8A Poseidon and earned his wings of gold in May of 2016.

Upon completion of the P-8A Fleet Replacement Squadron (FRS) located at NAS Jacksonville, FL in January of 2017, he was assigned to the VP-4 "Skinny Dragons" stationed in NAS Whidbey Island, WA.

LT Kappel is currently serving as an Assistant Professor of Naval Science, the Naval Aviation representative, and the 4/C advisor of the Marquette NROTC unit. 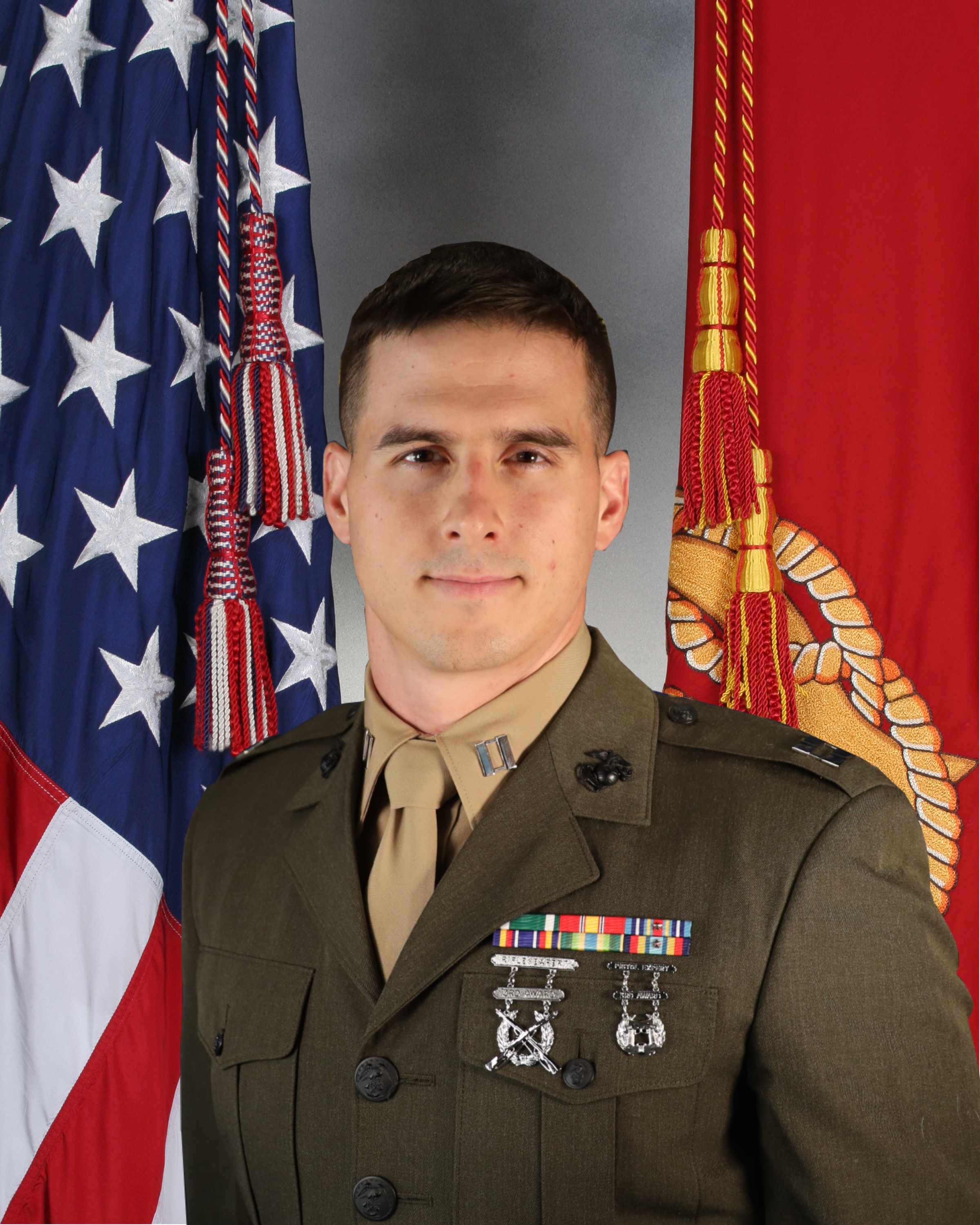 Nathaniel Lambert commissioned as a Second Lieutenant in the US Marine Corps in 2015 through the Naval ROTC program at Washington State University. He then attended the Basic Officer Course and the subsequent course for his occupational specialty as a Ground Intelligence Officer: Infantry Officer Course, Scout Sniper Unit Leader’s Course and Ground Intelligence Officer’s Course.

Lieutenant Lambert then received orders to 1st Marine Division aboard Camp Pendleton. During his first year in the fleet in 2017, he served in the intelligence sections for both the Division and 5th Marine Regiment. He then received orders to 3rd Battalion, 5th Marines in early 2018 where he deployed as the scout sniper platoon commander as part of the 11th Marine Expeditionary Unit (MEU) from May - November of 2019. His platoon participated in multiple theater security cooperation events, training with partner nations in both the Middle East and the east Asia.

Upon returning from deployment, Captain Lambert transferred to 1st Battalion, 1st Marines where he served as the battalion’s intelligence officer. As the intel officer, he supported the Southwest Border Mission in the summer of 2020, where the battalion assisted Customs and Border Patrol, and another deployment with the 11th MEU from August 2021 – March of 2022.

Captain Lambert was then selected to be the Marine Officer Instructor at Marquette University Naval ROTC. He, his wife Malia and their daughter Molly moved to Milwaukee, Wisconsin in July of 2022 to begin the new position.

Captain Lambert has been awarded the Navy and Marine Corps Commendation Medal. 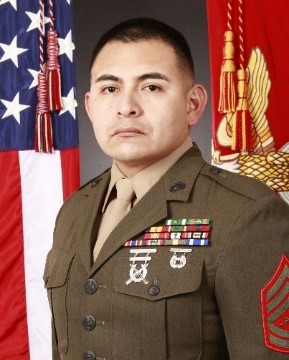 ted in the Marine Corps in January of 2005. He attended recruit training aboard Recruit Training Depot Parris Island, SC. Upon completion of recruit training, Private Hernandez attended Marine Combat Training aboard Camp Geiger NC. In May of 2005, Private Hernandez reported to Fort Leonardwood, MO where he gained the MOS of Logistics Vehicle Operator 3533.  There, he was promoted to the rank of Private First-Class.

In August of 2005, Private First-Class Hernandez reported to 2nd Transportation Support Battalion in Camp Lejeune North Carolina.   In September of 2005, Private First-Class Hernandez was augmented  to Combat Logistics Company-119 and deployed in support of Operation Iraqi Freedom. In December of 2005, while deployed, he was combat meritoriously promoted to the rank of Lance Corporal. Upon returning from deployment, Lance Corporal Hernandez was assigned to Combat Logistics Battalion 2.

Upon completion of his tour at Parris Island in 2012, Sergeant Hernandez received orders to Truck Company, Headquarters Battalion, 1st Marine Division in Camp Pendleton, CA. In October of 2012, Sergeant Hernandez was assigned to 3rd Battalion, 4th Marines and prepared to deploy in support of Operation Enduring Freedom. In February of 2013, he was promoted to the rank of Staff Sergeant. Staff Sergeant Hernandez then deployed in March of 2013 with 3rd Battalion 4th Marines as the Motor Transport Operations Chief. Upon returning from his 4th deployment in September of 2013, he was assigned to be the Motor Transport Operations Chief with Communications Company.

In November of 2020, Gunnery Sergeant Hernandez received orders to Marquette University to serve as the Assistant Marine Officer Instructor.

Master Sergeant Hernandez was promoted to his current rank on July 1st, 2022.