Biogenesis and regulation of OXPHOS complexes

In humans, numerous pathological conditions have been linked to mitochondrial dysfunction and defects in their oxidative phosphorylation (OXPHOS) capacity. The activity of the mitochondrial respiratory chain protein complexes is primarily or secondarily affected in OXPHOS metabolism diseases. The research in our laboratory is focused on understanding the process of assembly and regulation of the mitochondrial OXPHOS complexes. 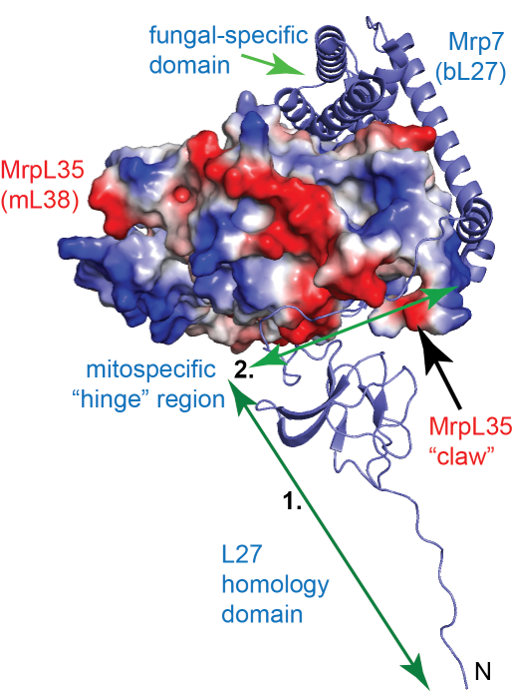 A small, but enzymatically important, subset of OXPHOS proteins are encoded on the mitochondrial genome and synthesized by mitochondrial ribosomes (mitoribosomes). Our research seeks to understand the molecular mechanisms that regulate mitoribosome activity, and thus has important implications for the OXPHOS complex assembly and the bioenergetic capacity of the cell. The project is funded through the NSF is focused on the molecular dissection of the mitospecific protein MrpL35 (mL38) and partner proteins, Mrp7 (bL27) and MrpL28 (mL40). These proteins are located in the central protuberance (CP) region of the yeast mitoribosomal large subunit (54S subunit).

Our lab’s recent findings have highlighted the CP as a key regulatory region of the mitoribosome, which serves to ensure coordination of the translational process with the downstream, chaperoned events of OXPHOS complex assembly, in particular of the cytochrome c oxidase (COX) enzyme (Box et al., 2017). We are currently pursuing experiments to gain a greater molecular and functional insight into these three key proteins and their interaction with each other.

Project #2 Establishing a disease-model system to functionally characterize the mL44 protein, a component of the membrane protuberance region of the mitoribosome (NIH R15 AREA funded)

Recent clinical studies have demonstrated that mutation of the human mitoribosomal MRPL44 (mL44) is directly linked to childhood-onset hypertrophic cardiomyopathy and a progressive multisystem disease with neurological and neuro-ophthalmological impairment. This disease is caused by a homozygous mutation of residue Leu156(Arg) in a structurally conserved region of the mL44 protein family termed here the “a -helix 1-turn-a-helix 2 region”. Based on location of mL44 protein within the membrane protuberance region and the observed OXPHOS defect in patients carrying the Leu156(Arg) mutation within the MRPL44 (mL44) protein, we propose that the mL44 proteins play a critical role in the assembly and/or the membrane tethering of the mitoribosomes to ensure the co-translational membrane insertional process of nascent chains. The central hypothesis underpinning the proposed study is that the “a -helix 1-turn- a -helix 2 region” of the mL44 protein represents a critical interface, which facilitates protein-protein interactions required for mL44/mitoribosome membrane anchoring. The ability of MrpL3/mL44 and MrpL15/mL57 to regulate mitoribosome assembly and their membrane anchoring to ensure coordination of their translational activity with the events of co-translational membrane insertion and OXPHOS complex assembly, will be determined.

Dr. Stuart is NOT currently accepting new Ph.D. students into her lab.

Dr. Stuart IS currently accepting UNDERGRADUATE students into her lab. Please contact her for more information.