Dr. Makky is the director of the Molecular and Cellular Core facility. Her responsibilities of running the facility includes training graduated students in the area of molecular biology. The Molecular and Cellular Core facility is an essential component of our Biomedical Sciences department and has proven to be of great importance to both investigators’ research and graduate students training.

The core is focused on developing different molecular and cellular protocols in collaboration with multiple investigators for in vitro and in vivo gene manipulations.

One of the major collaborative projects is the development of a baculovirus system to over express or knockdown genes in rat brains.

The core facility is initiating the baculovirus project to manipulate gene expression in vivo. Recently, we generated a low titer recombinant virus that was able to express GFP under the control of the astrocyte-specific GFAP promoter in rat brains and there is an on going effort to produce the recombinant virus at higher titer.

Our future aim is to generate different recombinant viruses expressing the gene of interest under the control of different promoters.

The core is also consulted for but not limited to:

Prior to Marquette University, Dr. Makky conducted her research at the Medical College of Wisconsin. As a postdoctoral fellow her research focused on determining the role of target of rapamycin (TOR) signaling on intestinal development using Zebrafish embryos. Dr. Makky's findings suggested that signaling through TOR complex 1 regulates a critical transition window during intestinal development. Furthermore, data indicates that TOR activity is required for epithelial growth and differentiation during endoderm-intestine transition. This work resulted in a number of publications and national presentations. To complete this project Dr. Makky utilized numerous molecular and cellular techniques, including DNA cloning, RT-PCR, RT-qPCR, morpholino mediated gene knockdown, and whole-mount in situ hybridization. 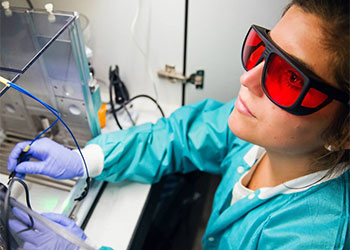