Dr. Erik Janners, director of music at Marquette University, is internationally recognized as a conductor, scholar and performer. Dr. Janners holds degrees in percussion performance from Alma College and the University of Utah, and a doctorate in wind conducting from the University of Alabama.

Prior to his arrival at Marquette, Dr. Janners served as director of bands at Saint Xavier University in Chicago, Illinois, and at the University of Regina in Saskatchewan, Canada. At Marquette, Dr. Janners conducts the wind ensemble, orchestra and pep bands. He also teaches courses in conducting, music history and music theory. He also conducts a community wind ensemble, the Knightwind Ensemble, located in Milwaukee.

As a scholar, Dr. Janners has had numerous articles published in The Instrumentalist magazine, as well as in Canadian Winds, the national periodical of the Canadian Band Association, and in Alta Musica, the publication of the International Gesellschaft zur Erforschung und Forderung der Blasmusik (IGEB). His research interests include the field of performance psychology, and he has presented at numerous state, national and international conferences on the subject. In 2007 he received Saint Xavier University's Teaching Excellence Award, and he has been awarded the National Band Association's Citation of Excellence three times.

Dr. Janners has traveled to Italy, Germany, Latvia, and Austria since 2016 to conduct a series of concerts as a part of the International Music Project and to work with the Latvian conductor Janis Purins.. He also traveled to Portugal to present a paper on Performance Psychology at an international conference in 2012. He is a current or former member of the College Music Society, NAfME, IGEB, WASBE, CBDNA, and the Percussive Arts Society.

Dr. Joel Flunker recently returned to his native Wisconsin after more than 20 years in the United States Coast Guard Band. As a member of the Coast Guard Band, Dr. Flunker had the opportunity to perform in  virtually every state, Japan and Taiwan. In addition to performing with and having the opportunity to conduct one of the finest concert bands in the world, Dr. Flunker has performed with ensembles as diverse as the New York Philharmonic and the Hartford Jazz Orchestra. He has been a full-time music  educator at the elementary, high school and university levels. 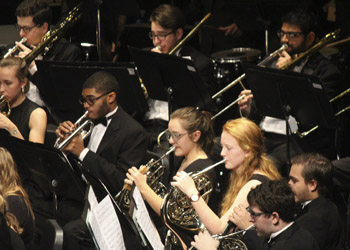