Ferromagnetic materials (like iron) can have a spontaneous magnetization even in the absence of any externally applied magnetic field. This property is useful for a wide variety of applications, but it is particularly useful in the area of data storage because the magnetization has two values for any given field. (This behavior is demonstrated in the hysteresis loop shown to the left).

Since the first magnetic hard drives were built the areal density of magnetic bits has been doubling at a rate of about every other year. This is accomplished primarily by reducing the amount of magnetic material necessary to store information. This process can not continue indefinitely, therefore other data storage techniques are necessary.

Nanowires made out of ferromagnetic materials are a potential solution. The wire geometry is advantageous because a wire is not necessarily confined to the surface of a disk; spatial constraints are no longer an issue.

Additionally, we have learned that it is possible to move information rapidly along the nanowire with weak magnetic fields; leading to devices that could operate significantly faster than currently available.

Here in the Physics Department at Marquette University my undergraduate students and I use computer simulation to model and understand high speed magnetization dynamics and to develop techniques to read and write information quickly and reliable. Computer simulation is useful because we need to work on a scale that has a spatial resolution of a few nanometers (1/1000 of the width of a hair) and on a time scale of 100's of picoseconds (10-12 s). Experimentally it is possible to explore the behavior with comparable spatial resolution, or with comparable time resolution, but techniques which have access to both simultaneously are lacking. Computer simulation has proven to be a valuable tool for both understanding high speed magnetization dynamics and for predicting behavior in new systems. We use the computer predicatively and develop the results to gain new understanding of the important processes involved.

Below is a description of some of the current areas of active research going on in my group. A list of publications follows, a majority of my undergraduate students are co-authors on these papers as they are in fact generating the bulk of the data. 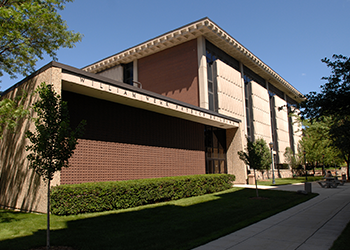