Mike traveled to Zurich, Switzerland to work with Dr. Brown on a new positron experiment.

Ben worked at the National Renewable Energy Laboratory in Denver as part of the Science Teacher and Researcher (STAR) program. The research involves looking into the process of cleaning and annealing the graphene to optimize the transfer of other layers to the subsequent layer of grapheme, and studying the migration and bonding properties of deposited metal films on cleaned/annealed doped and un-doped films for use in transparent conducting electrodes.

Kyle worked at Marquette University with Dr. Kunz on an NSF funded project studying the effects of tiny defects on magnetic domain wall motion and some new dynamical behavior in ultrathin nanowires.

Preston worked with Melissa Vigil in the physics department at Marquette University on physics laboratory exercise developments. In particular he worked to develop a photovoltaic lab for use in the introductory course sequences. He also worked on some electronic and other various labs for the PHYS 1001 - 1004 courses

Rebecca participated in the NSF-REU program at the University of Minnesota.

Dan went to Sandia National Lab in Albuquerque, NM to participate in the Homeland Security STEM program. The project involves testing different explosive materials (including non-ideal explosives) and determining their equivalence to a well-characterized reference explosive material.  A few of the tests are measuring the deflection of a structure, air blast measurements, and high speed video of the blast itself.

Abigail went to the University of Iowa, where she participated in the Summer Undergraduate MSTP Research (SUMR) Program for students interested in combined M.D./Ph.D. programs.

Kelsey received an Undergraduate Research Award from the Wisconsin Space Grant Consortium. She worked at Marquette University with Dr. Karkheck, modeling the mechanism by which bacteria move.

Jesse worked at Marquette University with Dr. Kunz on an NSF-funded project investigating multiple nanowire systems. A new technique, which promises to individually select a domain wall to move in an array of wires and walls, will be tested, which will be useful for proposed recording devices. 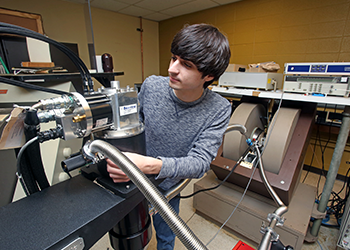