The History of the Golden Eagle Battalion

Military Training at Marquette dates back to October 1918 when a unit of the Students Army Training Corps of the United States was established on campus as part of the World War I effort. At the end of the war, the Student Corps was demobilized. In 1940 a Naval ROTC unit was established at Marquette. In September 1951, the United States Army Corps of Engineers started a branch Army ROTC at the request of the university. Effective with the fall enrollment of 1960, the AROTC program was changed to General Military Science to provide a broader base for student participation. In 1973, the ROTC program was opened to women. This tradition continues as each year young men and women are commissioned officers in the Active Army, Army Reserve, and the Army National Guard. Today there are a total of 119 cadets enrolled in the program.

The History of the Battalion Crest

Our Battalion crest, the heritage of Marquette University, our host institution. The upper portion is a scene that is taken from a United States postage stamp of the Trans-Mississippi issue of 1898. It bares the label, “Marquette on the Mississippi.” Father Marquette is portrayed half turning to speak to a group of Indians while he points in the great river whose course he followed and explored. The principle design of the crest is the coat of arms of the noble Spanish family of Lily. A member of this family is Ignatius Lily, responsible for founding the Society of Jesus who in turn founded Marquette University. The two wolves represent the generosity of the house. It was said that the followers of the family were so well maintained that even the wolves found a feast within the kettle after the soldiers had eaten. The motto “Citoyen Patriote” means Citizen Patriot and represents our role as cadets and our commitment to serve our country as civilian soldiers.

The History of Marquette University

Marquette began as a dream of the Most Rev. Martin J. Henni, the first Catholic bishop of Milwaukee, but it took a trip overseas to find an investor to make it a reality. Belgian businessman Guillaume Joseph DeBuey promised 16,000 dollars for the proposed "academy of learning"; hardly enough to fund the establishment of a college, but just enough to keep Bishop Henni's dream alive for the next eight years until he could purchase a parcel of land on a hill topping today's North 10th and West State streets. Nearly three decades would pass before the doors of Marquette College, a small liberal arts school for men named after Father Jacques Marquette, opened on Aug. 28, 1881. Bishop Henni died just two days later, one might guess satisfied that his work was finished. Throughout the years, thousands of students have passed through Marquette's halls and classrooms, aspiring to achieve not only academic success, but a spiritual foundation to last a lifetime.

Understand our program in more detail by reading our "On Eagles Wings" document. 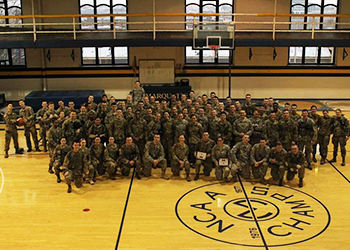