Marquette.edu // Raynor Memorial Libraries // About Us // 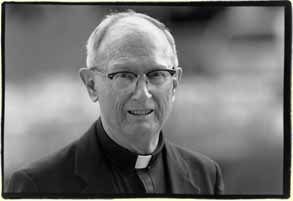 Father Raynor was president of Marquette from 1965 to 1990, the longest tenure of any president in Marquette's 121-year history. More than half of the university's 96,000 living alumni graduated during his presidency.

The university was awarded a chapter by Phi Beta Kappa, the prestigious national honor society. Lay people grew in number and influence on the faculty and in the administration. The university's board of trustees, originally three Jesuits, was expanded to be a group of 29 individuals, including eight Jesuits and 21 lay men and women. The campus grew from 26 acres to about 80 acres, and numerous new buildings were constructed. The university completed several ambitious fund drives, including the Campaign for Marquette (1985 - 1990), which raised more than $130 million.

In 1969, the Education Opportunity Program was established at Marquette and hailed as a model for programs providing the opportunity for an education to low-income, first generation college students. The first Pere Marquette Discovery Award was presented to the crew of Apollo 11 in 1969, and the honor was granted to Mother Teresa in 1981. The men's basketball team, under Coach Al McGuire, won the 1970 National Invitational Tournament and the 1977 NCAA Championship.

Father Raynor was born in Omaha, Nebraska, on Oct. 1, 1923. He received a bachelor's degree in Greek and Latin in 1947 and a master of arts degree in the same fields in 1948, both from St. Louis University. He entered the Society of Jesus in 1941 and was ordained in 1954. In 1959 he received a doctorate in higher education from the University of Chicago.

Father Raynor came to Marquette in 1960 and served as assistant dean of what was then the College of Liberal Arts. In 1962 he was appointed academic vice president, a position he held until he became Marquette's 20th president on Sept. 9, 1965. He was also a professor in the university's School of Education.

Through the years, Father Raynor's leadership was recognized through such honors as the Vocational Recognition Award of the Rotary Club of Milwaukee, the Milwaukee Press Club's Headliner of the Year Award, the Human Relations Award of the Wisconsin Region of the National Conference of Christians and Jews, the Distinguished Service Award of the Education Commission of the States, and the Pope John XXIII Award from Viterbo College. He was a member of Phi Beta Kappa, the national liberal arts honor society and received honorary degrees from Marquette, St. Louis University, Cardinal Stritch College and St. Norbert's College.

Father Raynor retired as president on Aug. 14, 1990, and became university chancellor on Aug. 15, 1991. As chancellor, Father Raynor assisted his successors and the university advancement staff in resource development and constituent relations. In September 1991 Marquette established an endowed faculty chair in honor of Father Raynor.

Father Raynor's death, on Nov. 14, 1997 after a brief illness, was a great loss. Upon his death, Father Wild said "Father Raynor worked tirelessly for this university, and for Jesuit, Catholic education in general. It is literally impossible to count the friends he made and the lives he influenced at Marquette, in Milwaukee, and throughout the world."

The Rev. John P. Raynor, S.J., Memorial Fund has been established for those who wish to remember Father Raynor by supporting the university to which he devoted 37 years of his life. As we build this great, new library facility honoring Fr. Raynor, he will remain in our memories and serve as an inspiration for all who knew him.