Colloquium has been cancelled for the rest of term. We anticipate to resume in Fall 2020 at this point.

Colloquium talks will be held in the Katharine Reed Cudahy Building, Room 401 at Cudahy Hall on the Marquette University campus. Please address inquiries/suggestions to Dr. Hamilton at sarah.hamilton@marquette.edu

Abstract. Electrical impedance tomography (EIT) is an imaging modality that measures currents and voltages on the surface of a body to image the electrical conductivity within the body.  Image reconstruction in EIT is a severely ill-posed, nonlinear inverse problem.  In this talk, I will present two direct reconstruction methods based on complex geometrical optics solutions: Calderón's method and Nachman's D-bar method.  Both methods provide a point-wise reconstruction of the image. Calderón’s method is a linearized approach while the D-bar method solves the fully non-linear inverse problem.  I will present both methods and their ability to address clinical application concerns. (more information)

Abstract. Geophysical natural hazards — storm surge, post-fire debris flows, volcanic flows and ash fall, etc. — impact thousands to millions of people annually. Yet the most devastating hazards, those resulting in loss of life and property, are often both geographically and temporally localized. Thus they are effectively rare events to those impacted. We will present methodology to produce probabilistic hazard maps that can rapidly be updated to account for various aleatoric scenarios and epistemic uncertainties. This hazard analysis utilizes statistical emulators to combine computationally expensive simulations of the underlying geophysical processes with probabilistic descriptions of uncertain scenarios and model parameters. The end goal is not a map, but a family of maps that represent how a hazard threat evolves under different assumptions or different potential future scenarios. Further, this approach allows us to rapidly update hazard maps as new data or precursor information arrives. (more information)

A number of faculty members will be giving short (5 min) intro/summaries of their research areas. This is a great opportunity for students at all levels, as well as faculty, to learn about current MSSC research and to start new collaborations.

Abstract. One of the fundamental questions in ecology and evolutionary genetics is how is biological diversity maintained within and amongst populations. Classical nonlinear differential equations that capture population or genetic interactions have played an important role in developing biological theories on how diversity is maintained. As ongoing empirical investigations uncover the nuances of these interactions, they open the way for more sophisticated models and the need for expanding mathematical methods to analyze them. In this talk, I will develop two sets of multi-scale models, motivated by recent empirical evidence. The first couples differential equations that capture interactions amongst populations with variation within the population. At a finer scale, the second models specific protein-gene interactions that influence population-level traits. For both models, I will discuss new mathematical questions and analysis that provides insight into mechanisms that enable diversity at these various scales. (more information)

Abstract. Diffusion of charged particles, or electrodiffusion, plays an important role in many physiological systems including the human stomach. The gastric mucus layer is widely recognized to serve a protective function, shielding your stomach wall from the extreme acidity and digestive enzymes present in the stomach. However, there is still much debate regarding the control of electrodiffusive transport through the mucus layer. In this talk, I will discuss a mathematical description of electrodiffusion within a two-phase gel model of gastric mucus and the challenges associated with its analysis and numerical simulation. This model is used to investigate physiological hypotheses regarding gastric layer maintenance that are beyond current experimental techniques. (more information)

Abstract. Optimization is central to both supervised machine learning and inverse problems in computational imaging. These problems are often ill-posed and some form of regularization is necessary to obtain a useful solution. However, new paradigms in machine learning and computational imaging necessitate rethinking the role of regularization, as I will illustrate with two examples. First, in the context of supervised learning with shallow neural networks, I will show how a commonly used form of regularization has a surprising reinterpretation as a convex regularizer in function space. This yields novel insights into the role of overparameterization and depth in learning with neural networks having ReLU activations. Second, I will discuss a novel network architecture for solving linear inverse problems in computational imaging called a Neumann network. Rather than using a pre-specified regularizer, Neumann networks effectively learn a regularizer from training data, outperforming classical techniques. Beyond these two examples, I will show how many open problems in the mathematical foundations of deep learning and computational imaging relate to understanding regularization in its many forms. (more information)

As tropical storms go, you have probably heard of Hurricanes, Tropical Cyclones, El Niño, and La Niña. But you probably haven't heard of the Madden-Julian Oscillation (MJO). It is the major contributor to rainfall in tropical regions and influences the climate in Wisconsin regularly. Unlike Hurricanes and El Niño, the MJO is still not well understood. In an effort to understand the mechanisms of the MJO, I will describe a model building from a dynamically stationary "background" tropical rainfall model and coupling that to a tropical wave model. These models use Stochastic Differential Equations (SDE) and Stochastic Partial Differential Equations (SPDE) as the building blocks. In the "background" model, an SDE model is used which leads to characteristics of criticality and phase transitions. For the full model with waves, we use a continuous one-dimensional SPDE. Because of the simplicity of the models, we are able to solve many statistics exactly, or run fast numerical experiments. (more information)

Colloquium dates and speakers for Fall 2019 - Unless specified, the talks will begin at 2:00pm CT in Room 401 at Cudahy Hall. 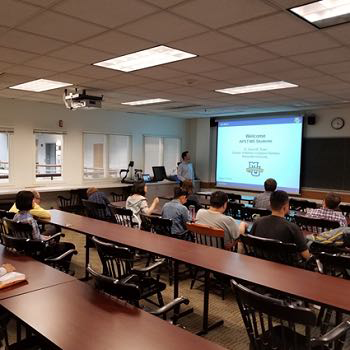