The Major in Mathematics for Elementary School Teachers (MELT) prepares students who aspire to be elementary school teachers to become mathematics education leaders. Students will obtain a strong mathematics background, taking several of the mathematics courses required of the math major for secondary school teachers. Graduates will be well prepared to serve as "mathematics specialists" in their schools – able to play leading roles in mathematics education in their schools and mentor other teachers. The major is limited to students enrolled in the teacher education program in the College of Education who seek grades 1-8 certification.

A good candidate for the MELT major:

The MELT major is rewarding but also demanding. There is a big jump in difficulty from MATH 1400 and MATH 1451 to MATH 2350 (Foundations of Mathematics), and a second jump from MATH 2350 to 3000 and 4000 level mathematics courses. Students should anticipate these challenges, and be prepared to work hard and seek help outside of class. [Richard Dahlke's guide for students, How to Succeed in College Mathematics, is a valuable resource].

Students planning to complete the MELT major should consult with an advisor in the Department of Mathematical and Statistical Sciences (Dr. Marta Magiera) and with the Director of Undergraduate Advising in the College of Education. It is important for students to meet with their advisors as early in their studies as possible in order to map out a path to timely graduation.

Special note regarding academic progress in the major:
An average GPA of 2.75 in MATH courses is required for student teaching. So grades of B- or lower must be offset by grades of B or higher. A grade of C- or lower is especially serious, because the course must be repeated, possibly extending the time to graduation. Several grades of C- or lower make it unlikely that the student will be able to complete the major. In that case, a different academic major should be considered.

The major requires the following thirty-one hours of mathematics courses, all of which carry three credits except for MATH 2031 and MATH 2032, which carry two credits each: 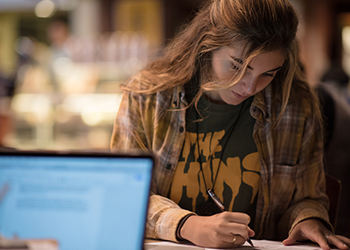