Office of the Provost

Office of the Provost

Marquette.edu // Office of the Provost // 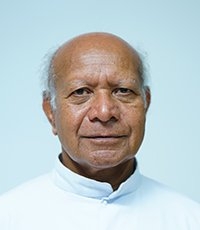 Fr. Joseph Puliparambil, S.J. (or P.T. Joseph) received his Ph.D. in Electrical and Computer Engineering from Marquette University in 1992. His thesis title was "Panoramic Holographic interferometry and three dimensional imaging," and the work was funded by a NASA scholarship. He received his M.B.A. from St. Joseph's University in Philadelphia in 1987, and the M.Th, JDV from Pune, India, in 1985.

P.T. Joseph received his M.Sc. (in Physics) from Madras University, India, in 1981. SInce 2017, he has been the Director of the Amaljyothi Engineering College at Kanjirapally in India. Since 2014, he has also been Director of Marian International Institute of Management, Kuttikanam, India. P.T. Joseph teaches courses in various topics in computer engineering and science such as Electronic Commerce, Data Analytics, Informations Systems programming languages, Expert Systems, and Computer Communication Systems.