The Outstanding Researcher Award is the Opus College of Engineering’s annual award recognizing research excellence. Awarded at the annual convocation, this honor is given to an engineering faculty member that has demonstrated outstanding scholarly work that has an impact on the world.

Borg's research involves shock physics phenomenology. His research relates computer simulation models of materials at a meso-scale (somewhere between nanometers and microns) and compares the results to shock physics experiments in which materials are compressed at very high rates. These studies enable his research team to obtain the equations describing the mechanics of complex materials at a very small scale.

He has also performed extensive studies in areas of shock driven liquid phenomenology. His study entitled ‘Aerodynamics of the knuckleball pitch: Experimental measurements on slowly rotating baseballs’ published in the American Journal of Physics.

He has spent summers working at Sandia National Laboratory, the Air Force Research Laboratory in Eglin Florida and Cambridge University's Cavendish Laboratory. Borg’s research has been funded by the National Science Foundation, the Department of Defense and Sandia National Laboratories and he has authored or coauthored over 45 journal, peer reviewed conference or government technical reports related to various aspects of shock physics phenomenology. 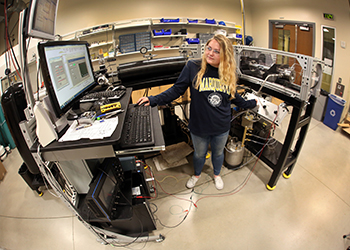