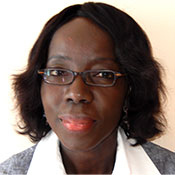 Marjorie Valbrun has worked for The Baltimore Sun, The Wall Street Journal and The Philadelphia Inquirer and her work has appeared frequently in The Washington Post. Valbrun spent a year reporting on the aftermath of the 2010 earthquake in Haiti for the International Consortium of Investigative Journalists. She has won awards for international reporting and feature and editorial writing. She has degrees from Long Island University and Columbia University and has taught journalism at Howard University. She is a former Nieman Fellow at Harvard University and a past Alicia Patterson Foundation Fellow.

Valbrun concentrated during her fellowship on reporting about welfare reform. Several journalism majors worked with the former Nieman Fellow as reporting assistants.