Legacy of Perry and Alicia O’Brien lives on in fellowship 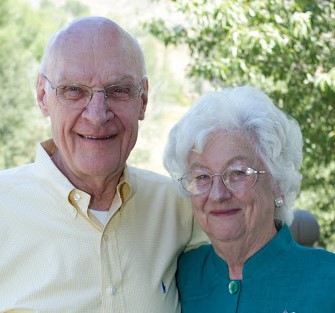 In 2013, Peter and Patricia Frechette donated $8.3 million to the Marquette University Diederich College of Communication in honor of Patricia's parents, Marquette alumni Perry and Alicia O'Brien. They designated the gift to the launch of “The Perry and Alicia O'Brien Fellowship in Public Service Journalism,” helped hammer out the details of the program and remained active in it.

In 2021, the Frechette Family Foundation donated an additional $5 million to fully fund and enhance the Fellowship. “Over the past four years, we’ve been fortunate to meet with fellows and listen to student interns and witness the powerful impact of the program. It is both exciting and inspirational to carry our parent’s legacy forward,” president of the Frechette Family Foundation, Kathy Tenhula, said. She and her sister, Kristy Woolfolk, the Frechette's daughters, are active in the foundation. They are pictured below. 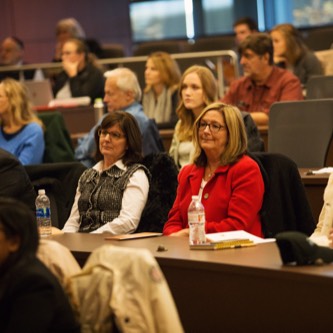 In late 2016, Patricia Frechette passed away, followed five months later by Peter. They had often noted that they aimed “to create a better future for in-depth news reporting in America.” The couple, who lived a majority of their lives in Minneapolis, did just that. The deep 55-year marital bond between these high school sweethearts in Janesville, Wisconsin touched hearts and minds at Marquette and elsewhere, the Milwaukee Journal Sentinel noted in a story after their passing. What follows below is the story of Pat’s parents, the O’Briens.

Perry and Alicia graduated from Marquette in 1936 and 1935, with degrees in journalism and liberal arts, respectively.

Perry O’Brien was a consummate field reporter and staff photographer for the Janesville Daily Gazette, having the proverbial “finger on the pulse” of all things in Janesville and its environs. From the aftermath of WWII through the 1950s, he covered stories that defined the everyday life of his neighbors and fellow citizens. Perry mastered the art and science of journalism as a 1936 Marquette grad. But it was a personal connection with the local community — and genuine care for it — that underscored his stories and framed the images he took. Perry’s reach extended well beyond Janesville Daily Gazette by-lines. On most days at 1:30 p.m., locals tuned into 1230 AM radio WCLO to hear Perry — the secretary of the Wisconsin Breeders and Harness Horse Association— deliver his patented, “They’re off and trotting!” call from the Elkhorn track. And Perry’s contributions on behalf of his beloved community and the good of society at large shone through his commitment as admissions director of Rock County’s Milton College, a prominent institution founded in 1844 that closed in 1982. From journalism to higher education, Perry was a man who valued and promoted the things that build a strong community.

In 1934, her senior year, Alicia Sexton served on the Marquette University Coed Board, the executive committee of the central women’s organization on campus at the time known as the Coed Club. Though women had been allowed to attend the university as early as 1909 — Marquette was the first Catholic university to do so — the cultural transition took time and effort. The Coed Club was formed in 1919 to “encourage coeducation at Marquette.” By Alicia’s day, the club was going strong with 13 members on the board representing each college of the university; Alicia represented the College of Liberal Arts. This busy organization took on a number of duties including welcoming female freshmen, coordinating homecoming activities, sponsoring charity parties and managing Marquette’s Mother Daughter banquet. Alicia in particular headed the board’s “sick committee,” which was responsible for visiting Coed Club members who had fallen ill and looking after their needs. Alicia was also a member of Chi Sigma Chi, “one of the first sororities on campus in scholastic rating.” The sorority encouraged academic excellence among its members and awarded a laurel pin to the sister with the highest grade point average each semester.

More on the Frechette Legacy