Sermon on Community and Resistance

To feed, to heal, to raise from the dead, to foster and build communities of service—that’s the way of the Kingdom of God, the way of Jesus." ~ Rev. G. Simon Harak, S.J.

Once, a long time ago, I was on a retreat in a house far up on the hillside of a beautiful valley. It was an isolated place, and there were only a few houses below in the valley. One day, as I was praying on the porch overlooking the valley, a mother came out of one of the homes and called to her son. It was evening, and perhaps she was calling him home for a meal.

"Michael!" she called. But please forgive me—I cannot express the way she said it. There was such a tone of mother's care in her call, such a history of love. And her voice had the slightest tinge of urgency to it. Not fear—not even anxiety, really—but you could tell she was concerned that she couldn't see him right away. Where was her son? He needed to come home for supper. "Michael."

It's been nearly 30 years and I still remember her call. I remember how, even though it was gentle, her voice somehow carried over the whole valley and reached up even to the side of the hill where I was praying. I think her call was memorable not only because it reached my ears from so far away, but also because it touched my heart.

I believe that is what has happened today, when Jesus calls His twelve apostles. He calls them by name. And yes, they hear His words, but their hearts are touched as well. When He pronounces their name, it moves their souls in a way that no other has ever moved it—not even the call of their father or mother.

Do you remember how John in his Gospel tells of first meeting Jesus? He told of how when he came up to Jesus, he asked Him, "Rabbi, where do you live?" I think that perhaps John wasn't sure what to say to this man whom John the Baptist had just identified as the savior of the world. And Jesus said to him, "Come and see." Fifty years later, John's remark about that first meeting, those first words of Jesus was: "It was about four o'clock in the afternoon." Can you imagine the impact that that meeting, those simple words, that open invitation had on him? After all those years, he still remembered the exact time: "I heard His voice. He spoke to me. Even after all this time, I remember. I remember it was about four o'clock in the afternoon"

And how about you? How about me? Do you remember when He first called you? Does it still "sound an echo in your soul"? Do you follow it still? Or have you not yet heard your name called by the one who speaks to your soul as no other can?

But I would like to invite you to turn away from the ones being called to the One doing the calling. Because Jesus' experience is always helpful to examine for us who have his Spirit. At the beginning of the passage, Jesus realizes that He simply can’t continue to spread the good news by Himself. I can’t do this, He says. I can’t do this anymore; I can't do it alone. So He asks His disciples to pray to God His Father to send laborers out into the harvest, laborers from the Master of the Harvest to help Him in the work of the Kingdom. But what happens? A little while later, we see that Jesus Himself is sending the laborers out into the harvest. And we learn two things from this. The first is clear, that the Master of the harvest is Jesus.

But the second also teaches us something. Jesus begins by praying to the Father. But then, after a night of prayer, He finds out that God has named Jesus Himself to be the Master of the harvest—that God has conferred this authority to Him. Doesn't that happen sometimes to us as well? We begin by asking God, sometimes pleading for help: "God help me. I can't do this. I can't go on. You've got to do something for me, God." But then, after we quiet ourselves in prayer, we find out that God has given us the power to solve the problem ourselves. To call our own helpers and assemble our own community. God has taken our weakness and made us strong. Sometimes, when it seems that God is not doing anything to answer our prayer, it is because He has placed the power to answer our prayer within us. In the Gospel of Mark, Jesus teaches, "Whatever you ask for in prayer, believe that you have it already and it is yours" (Mk 11:24). And in discovering within ourselves that power, that authority, we gain a new understanding of our dignity as daughters and sons of God. That is why, after almost all of His healings, Jesus took care to teach the one He had healed, "Your faith has saved you."

Lastly, let's put this call into its historical context. You all know that about a half-century before Jesus was born, the undefeatable military legions of the Roman Empire had swept into the small Middle Eastern country of Israel. They had no trouble conquering the country, but a great deal of trouble holding on to it. They had orders to kill the people, to maim them, to torture them to death—even on the cross. If the people were poor, if they were sick, if they were unemployed, hungry and robbed of their dignity, then they couldn't resist the empire that came to steal their resources, tax their livelihoods and degrade their labor, all the while singing that theirs was an ideal and even god-ordained civilization.

The Way, the Truth, and the Life.

Now I know that some of you are saying, "Well, that could never be me." But can you also see that these people, whose names we hear today—these people who were fishermen and farmers, outcasts and collaborators—can you see that they could very well have said the same thing to themselves? But they had then what we have now: like us, they had the name of Jesus. Like us, they had His commands. And like us, they heard Him call their names. In fact, I dare to say that we are better off now than were these first-called apostles. Better off because we have His Spirit, since "at that time, the Spirit had not yet been given, because Jesus had not yet been glorified" (Jn 7:39).

Rev. G. Simon Harak, S.J. (1948-2019) was the founding director of the Center for Peacemaking. In his six years at Marquette, Simon helped build a thriving research and co-curricular center that actively explores the power of nonviolence.

Simon frequently emphasized that community is at the core of nonviolence in his sermons and teachings. We are grateful to Simon for sharing his lifelong witness to nonviolence with so many. 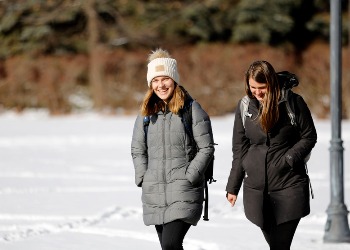 The Center on social media