Publications:
Book Review of “The Minority Body” by Elizabeth Barnes. Forthcoming 2023. Journal of Philosophy of Disability.

Aquinas’ Attribution of Creation Ex Nihilo to Plato and Aristotle: The Importance of Avicenna

2021 PhD graduate Nathanial Taylor has accepted a 2-2 TT position at the  School of Philosophy at Catholic University.

Public lecture at the University of St. Thomas - Houston in January entitled "Aquinas and Avicenna on the Structure and Nature of the Categories: Towards a Proof of the Real Distinction between Being and Essence."

Public lecture at the Catholic University of America in February entitled "Categories, Essence, and Modi Essendi: Avicenna at the Heart of Aquinas's Metaphysics."

Public lecture at the Dominican School of Philosophy and Theology in March entitled "Essence and Existence in the Categories: Avicennian Principles Underlying Aquinas' Metaphysics."

Giving a paper at the Medieval Philosophy and Theology Conference at the University of Notre Dame, May 19-21, entitled "If 'Being not in a Subject' is Not the Definition of Substance, then What is It? Avicenna and some Late Antique Commentators."

Love, Sex and Justice in the South
PhD students Karolyn Burns and Melady Elifritz were invited to speak on a panel at this year’s Southeastern Women’s Studies Association (SEWSA) Conference on Love, Sex and Justice in the South (3/24-3/26, virtual). The panel Feasting and the Ecologies of Sex weaves together sexual excess under racial capitalism from 16th century Europe, plantations of the American South and our current time. More information 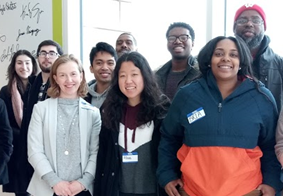