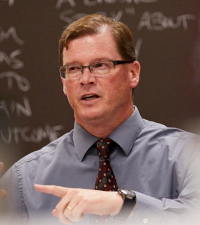 Lowell Barrington is Associate Professor in the Department of Political Science. His teaching and research specializations include post-Communist politics, ethnicity and nationalism, democratization, and political science research methods. Prof. Barrington has received research grants from the National Science Foundation (NSF) and the National Council for Eurasian and East European Research (NCEEER). He is a Research Affiliate with UW-Madison's Center for Russia, East Europe, and Central Asia (CREECA). He has also served as Editor-in-Chief of Analysis of Current Events, as a Social Science Proposal Reviewer for the National Research Council, and was Vice President of the Association for the Study of Nationalities (ASN).

In the classroom, Prof. Barrington strives to help his students develop the ability to understand and explain major political outcomes. Similar to the central theme of his textbook, he encourages students to make sense of the many possible causal factors affecting politics by thinking about them as types of structures (political, cultural, identity-related, and economic) or choices (individuals and decision making). Like others in the Department of Political Science, he seeks to develop his students' ability to critically assess problems presented to them. His central concern in the classroom is how his students develop and support their arguments about politics rather than the positions they ultimately take.