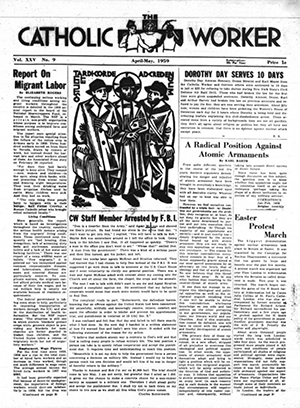 The Catholic Worker movement began in New York City in 1933. It was founded by Dorothy Day, a radical journalist and Catholic convert, and Peter Maurin, an itinerant French worker/scholar. The movement steadily grew into an international faith-based, grassroots movement for peace and social justice through nonviolent direct action. It continues its work to this day.

The Catholic Worker newspaper was launched at the movement's inception as its official organ and continues publication to this day. As such, it has documented the voices, events, and values that shaped the movement across the decades. All but the first 10 years of The Catholic Worker have been digitized and are freely available via the Catholic News Archive, a digital library hosted by the Catholic Research Resources Alliance.

The Catholic Worker at Marquette

A major collection of archival materials relating to Day and to the Catholic Worker movement is held by Raynor Memorial Library's Department of Special Collections and University Archives. The collection now comprises more than 200 cubic feet, including the personal papers of Day, Maurin, and others involved in the movement; records of past and present Catholic Worker communities; photographs; audio and video recordings of interviews, talks, television programs, and peace demonstrations; and a wide variety of publications.