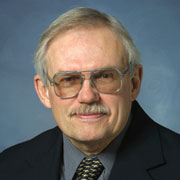 Since the late 1960s, Dr. Patrick W. Carey, the William J. Kelly, S.J., Chair in Catholic Theology, has examined the relationships between Catholics and other religious groups in the United States, focusing some research on the influence of Catholicism on politics and social thought.

This year, Marquette honored Carey with the Lawrence G. Haggerty Award for Research Excellence for his accomplishments and dedication to his scholarship.

“What’s important about this award is not the individual — it’s that the university rewards scholarship and research,” said Carey. “It’s actually a very Catholic way of doing things — to honor an individual who becomes a symbol for what’s taking place in the entire university.”

Carey’s first bit of inspiration for his life’s work came from a college history teacher who taught a course on American Catholicism. Although an undergraduate major in philosophy at St. John’s University in Collegeville, Minn., he later became interested in and did graduate work in theology and the history of theology.

Carey is transfixed by the dynamic ebbs and flows of Catholic thought through the key eras in U.S. history. He talks almost rhythmically about how Catholics as a group reacted to slavery and the Industrial Revolution. He speaks empathically about the social injustices that afflicted the predominantly lower- and working-class Catholics before the 1960s.

In the true Jesuit tradition, Carey’s exploration of the past is not merely an interest or quest for knowledge — it’s a vocation. It’s his calling.

Carey’s academic journey has included writing numerous historical studies on American Catholic thought and its leading thinkers. He was the first to gather and compile into a seven-volume critical edition the earliest scattered writings of Orestes Brownson, whom he calls “a very interesting creature — but also the strongest intellectual in 19th-century Catholic American history.” In 2004, Carey published a biography of Brownson, which won him a first-place Catholic Press Award. “I think it’s the best thing I’ve done,” he said, “up to this point.”

Although the Haggerty is an award for research and scholarship, Carey is — like many before him — a teacher first. In fact, one of his edited books, theBiographical Dictionary of Christian Theologians, is a quasi-encyclopedia that provides brief biographical sketches of the major Catholic, Orthodox and Protestant theologians in the history of Christianity. “It’s handy for students,” Carey added modestly.

Carey has a passion for the formation of Catholic identity at all levels of schooling. “I’m interested in how Catholic identity fits into the total educational enterprise,” he said. “Students at the university level are arriving with very little understanding of their own faith, whether Catholic, Orthodox or Protestant. We need to keep passing on the faith by intelligently, sympathetically and critically examining the Christian tradition at the college and university levels.”

To that end, the Marquette University Board of Trustees in 2005 approved the master of arts in Christian Doctrine, inspired and implemented by Carey, who is also a longtime member on the religious education committee of the Archdiocese of Milwaukee. The degree provides a broad understanding of the faith for those teaching theology in Catholic high schools, those involved in other ministries and those interested in theological enrichment.

Carey, who is married with two grown sons, has no immediate plans to slow down. He’s in the midst of writing a biography of Cardinal Avery Dulles, S.J., and recently updated Catholics in America (2008).