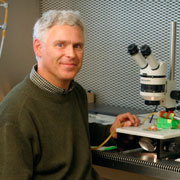 Since working on his master's thesis at Augustana College in Sioux Falls, S.D., Dr. Stephen M. Downs, Wehr Professor of Biological Sciences, has been interested in the process of normal egg maturation in mammals. He specifically studies the metabolic pathways that help regulate development of oocytes, unfertilized egg cells.

For his dedication to research and scholarship, Marquette awarded Downs the Lawrence G. Haggerty Award for Research Excellence. The annual award recognizes a faculty member who has demonstrated scholarly distinction and an all-encompassing belief in excellence.

"I am humbled and touched by this award, which honors the intrinsic interest I have in my area of research," said Downs. "I have an extremely supportive department, and I am grateful to everyone for being so easy to work with."

Downs strives to understand how the signal transduction function — the communication system — of oocytes drives production of normal eggs to complete maturation. Though Downs said he focuses mainly on the most basic, scientific level of understanding egg maturation, he is inspired by the applications of his research, which range from optimizing fertility treatments to understanding how to treat and prevent diabetes. The results of his studies are instrumental in understanding what causes fertility problems because successful reproduction depends on proper egg maturation. His research also has been applied to maximizing fertility efficiency in domestic livestock by perfecting in vitro procedures.

A major goal of Downs' research is to identify the specific molecules and metabolic pathways that regulate egg maturation, which is of prime importance in preventing errors in chromosome segregation and in promoting the production of high-quality oocytes that are capable of normal fertilization and embryo development. Understanding how these metabolic pathways regulate normal maturation is important because abnormalities in the process can lead to abnormal development of eggs, manifested in chromosomal irregularities such as Down syndrome.

Most recently, Downs' work has focused on the effects of a stress-response protein on regulating oocyte maturation in mice. Results of these studies could show a connection between physical, chemical, and metabolic stress and abnormalities in development.

Other scientists throughout the country have used Downs' research to gain a better understanding of the damaging effects of diabetes on reproductive cell development because some of the same metabolic pathways are used in both processes.

For Downs, research is more than just a big part of his job. It's his chance to be an explorer. "There's nothing like coming into the lab and finding out that the data you've collected matches what you hypothesized would happen," he said. "It's that excitement of discovery that keeps me coming back for more."

Downs plans to keep exploring how signal transduction function affects other areas of human development. He also is studying the role of certain enzymes in embryonic development to see if similar signaling systems operate after fertilization of oocytes.