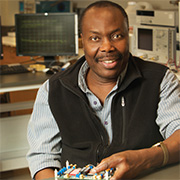 Professor of Electrical and Computer Engineering

Contaminated drinking wells. Deep sea oil spills. Homeland security threats. These are a few examples of how Dr. Fabien Josse, professor of electrical and computer engineering and the 2013 recipient of the Lawrence G. Haggerty Faculty Award for Research Excellence, is using his skills to contribute to finding answers to some of the world’s most pressing problems.

With support from Marquette’s Microsensor Research Lab team, Josse is investigating and developing novel sensors and sensor systems that can be used in liquid applications. Josse and his team have developed microacoustic wave-based sensors and microcantilevers to detect fuel and oil contamination, as well as contaminates such as organophosphate pesticides, which are used in agricultural production and can leak into groundwater, causing harm when ingested or absorbed through the skin.

In addition to designing new sensors to detect these harmful chemicals in real time, he and his colleagues are working to develop models that predict and optimize sensor responses. Current monitoring and testing techniques for liquids are time-consuming, expensive and often require field collection, transportation to a lab and then analysis. Josse says the goal of his research is “to build sensors to accelerate remediation by rapidly identifying and quantifying harmful contaminants and pollutants.”

During his 30 years on campus, Josse has secured more than $5.6 million in funding and is widely recognized for his contributions to the field of liquid-based sensors. Less than a year after completing his doctorate and beginning his career at Marquette, Josse applied for his first National Science Foundation grant. With feedback and guidance from his mentor and doctoral adviser at the University of Maine, Dr. John Vetelino, Josse was awarded the prestigious Research Initiation Grant, now known as a Career Grant. He was the first to receive such a grant in the College of Engineering and has since been awarded six additional grants from the NSF.

“The example and support provided by my mentor are qualities I’ve tried to emulate throughout my career,” says Josse, who has helped 17 Ph.D. students reach graduation, and continues to review and provide feedback on their current grant proposals. He is also a firm believer in the teacher-scholar model, typically taking on four courses each academic year while still managing to produce more than 165 publications during his Marquette tenure. He has presented his research to cutting-edge corporations and government entities, including Chevron, Rockwell Automation, the Army and Naval Research Labs, the NATO Advanced Study Institute on Smart Sensors and the National Institutes of Health.

Josse is respected for his ability to collaborate not only on campus, but throughout the country and world. “Fabien is actively contributing to solving important global issues, such as monitoring the health of drinking water,” says Dr. Robert H. Bishop, Opus Dean of the College of Engineering. “He has built impressive international collaborations while also reaching across Marquette’s campus to further not only his research, but the research of others as well.”