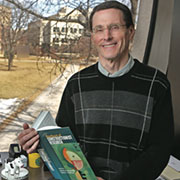 Professor of Social and Cultural Sciences

His career as a researcher is as varied as it is prolific, but Dr. James Holstein’s start as a sociologist was a bit shaky. Now a professor in the Department of Social and Cultural Sciences, he started as an undergraduate who “bounced around for seven years” at the University of California– Berkley during the height of the Vietnam War before declaring a sociology major. Holstein completed his doctoral work at the University of Michigan disenchanted, but was reenergized during a postdoctoral experience at UCLA.

Thirty-five years later, he’s a sure-footed scholar and this year’s recipient of the Lawrence G. Haggerty Faculty Award for Research Excellence for his scholarship on social problems, deviance, mental illness and family life. An internationally known sociologist, Holstein has served as editor of a leading journal in his field, Social Problems, and has published nearly 100 journal articles, 12 books and 28 edited volumes.

Holstein describes his work plainly: “I’ve been interested in how people construct the meaningful contours of their everyday lives through their routine actions and interactions,” he says. “For me, sociology deals with how our social surroundings and interactions condition what we see, say, do, feel and who we are.”

Holstein’s research has far-reaching implications for important societal and legal problems. Take mental illness, for example. His research into involuntary commitment hearings found that the process by which individuals are committed against their will is not uncaring or arbitrary. “It’s vastly complex because it often pits the rights of individuals and their personal well-being, however it might be defined, against the well-being of the community at large,” he says. “The legal system has struggled for decades to try to find a balance between individual liberty and community welfare.”

The veteran researcher is now applying a similar analytic lens to a decidedly different phenomenon: professional football. “I’ve always had a secret urge to work on something from my personal life that really grabs me,” Holstein says. “Since I was a kid, I’ve been a sports enthusiast, playing and following just about every sport imaginable.”

Perhaps serendipitously, Holstein and fellow Marquette Professor of Social and Cultural Sciences Dr. Richard Jones were dissertation advisers for former Green Bay Packers linebacker Dr. George E. Koonce. The three have expanded on Koonce’s research into the aftermath of football careers, and a new book, Is There Life After Football? Surviving the NFL, will be published this fall by NYU Press.

“Writing Is There Life After Football? has probably been the hardest writing project I’ve undertaken, but it’s also been the most fun,” Holstein says. “I’m pleased with the work we’ve done, but, to be honest, I’ve heard enough about profligate spending, Chronic Traumatic Encephalopathy and Richie Incognito to last a lifetime.”