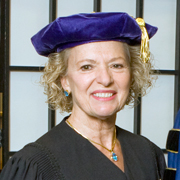 The Honorable Anne M. Burke is a leader not merely in the development of the law but in the life of the Catholic Church and our larger society. Her example in any of these spheres alone could provide an ample basis for extraordinary recognition by Marquette.

Justice Burke did not wait for training in the law to be of service to others. While working as a physical education teacher in her native Chicago, in 1968 she played a leading role in establishing the Chicago Special Olympics in the service of individuals with intellectual disabilities. Out of her efforts would grow the International Special Olympics, whose reach today, some four decades later, extends to more than 150 countries around the world. Millions of individuals have participated in the Special Olympics, and still more, through its work, have been enabled, empowered, and inspired. In 1968 the competition was not immediately well-received. The news media at the time thought it was exploitative. "We had to turn people's attitudes around, and it was very challenging. We needed a strong force — and Anne was that force,” says Barbara Lee Cohen, former Executive Director of Special Children’s Charities.

Seeking to serve in other ways, after being married and while raising a family, Justice Burke graduated from DePaul University and law school at Chicago-Kent College of Law. She established a neighborhood law practice, serving individuals in myriad ways from civil to criminal matters, with special attention to the needs of children and families. She became an Illinois state court judge in 1991, was appointed to the Illinois State Appellate Court in 1996 (and subsequently elected to a full term), and was appointed to the Illinois Supreme Court in 2006 and subsequently elected to a 10-year term. During her time on the Illinois Supreme Court, Justice Burke has written important opinions in areas of common, statutory, and constitutional law.

Even in the midst of her judicial service, Justice Burke has found time to serve the Catholic Church in a major capacity. In 2002 the United States Conference of Catholic Bishops appointed her to the National Review Board for the Office of Child and Youth Protection, a body which she eventually served as their Interim Chair. In this capacity, and thereafter as a member of the church and a public citizen, Justice Burke sought with respect to allegations and instances of sexual abuse by clerics to identify the truth by her best lights and to speak it. Her difficult but important service in this sphere demonstrates Justice Burke’s vigorous, thorough, and unyieldingly pursuit of truth.

Justice Burke earlier received the Josep O’Neill Award from the Marquette Law School’s National Sports Law Institute. Her remarks on that occasion and willingness to participate in the Law School’s program are further evidence of Justice Burke’s enthusiasm for and commitment to future leaders, whether they be in the church, the law, or the larger society.

Because of her innovation in founding the Chicago Special Olympics, her extraordinary contributions to justice, and her exemplary public service, Reverend President, I hereby recommend Anne M. Burke for the Marquette University degree of Doctor of Laws, honoris causa.