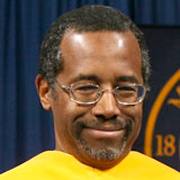 Candidate presented by: Dr. William Cullinan, Dean of the College of Health Sciences

Benjamin S. Carson, Sr., M.D., had a childhood dream of becoming a physician. Growing up in a single parent home and in dire poverty, he might have been precluded from the realization of his dream had it not been for his mother, who challenged her sons to strive for excellence. Young Ben persevered and today is a full professor of neurosurgery, oncology, plastic surgery, and pediatrics at the Johns Hopkins Medical Institutions, where he has directed pediatric neurosurgery for nearly a quarter of a century.

Dr. Carson performed the first separation of twins conjoined at the back of the head in 1987, the first completely successful separation of type-2 vertical conjoined twins in 1997 in South Africa, and the first successful placement of an intrauterine shunt for a hydrocephalic twin. While he has been involved in many pioneering and newsworthy operations, he feels that every case is noteworthy and deserving of maximum attention.

Dr. Carson has been honored with more than 40 honorary doctorate degrees. He is a member of the Alpha Omega Alpha Medical Honor Society, the Horatio Alger Society of Distinguished Americans, and many other prestigious organizations. He sits on the boards of directors of numerous organizations, and was appointed in 2004 by President George W. Bush to serve on the President’s Council on Bioethics. He is a highly regarded speaker who has addressed various audiences from school systems and civic groups to corporations and the President’s National Prayer Breakfast.

In 2001 Dr. Carson was named by CNN and Time Magazine as one of the nation’s 20 foremost physicians and scientists. That same year, he was selected by the Library of Congress as one of 89 “Living Legends” on the occasion of its 200th anniversary. He is also the recipient of the 2006 Spingarn Medal which is the highest honor bestowed by the NAACP, and received literally hundreds of other awards.

He is president and co-founder of the Carson Scholars Fund which recognizes young people of all backgrounds for exceptional academic and humanitarian accomplishments. The Fund is currently operating in 16 states and the District of Columbia. Dr. Carson also co-founded Angels of the OR, an organization that provides grants to assist families with non-covered medical care expenses involving both adult and pediatric neurosurgery.

His three books, Gifted Hands, THINK BIG, and The Big Picture provide inspiration and insight for leading a successful life. His fourth book, Take The Risk: Learning to Identify, Choose, and Live With Acceptable Risk, was released in early 2008. Dr. Carson has been married for more than 30 years to his wife, Candy, and is the father of three sons. And, yes, his mother, Sonya Carson, who helped to make all this possible, is still an inspiring force in his life.
Because of his excellence in the practice of medicine, his unique gifts as a surgeon, his willingness to treat patients that other physicians would consider “lost causes,” and his compassion for the human dignity of all his patients, Reverend President, I hereby recommend Benjamin S. Carson for the Marquette University degree of Doctor of Science honoris causa.