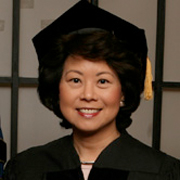 Candidate presented by: John F. Bergstrom, Chair of the Board of Trustees

Elaine L. Chao was confirmed by the United States Senate in January 2001 as the nation’s 24th Secretary of Labor. As Secretary of Labor, she directs one of the largest governmental regulatory departments with a $72.6 billion budget and responsibilities for such labor issues as worker safety, child labor, overtime pay, retirement benefits, and job training.

She is the first Asian American woman appointed to a President’s cabinet in U.S. history. When President George W. Bush nominated Secretary Chao, he described her as an individual with “strong executive talent, compassion, and commitment to helping people build better lives.” A dedicated champion of the nation’s workforce, Secretary Chao is focused on carrying out the Department of Labor’s mission of promoting and protecting the health, safety, retirement security, and competitiveness of our nation’s workforce.

Secretary Chao’s commitment to helping others stems from her background as an immigrant. She arrived in the United States at the age of eight from Taiwan speaking no English. Unable to understand her lessons at school, she quietly copied every letter from the blackboard to her notebook. Then she would wait – often late into the night -- until her father, who worked three jobs, came home to their one bedroom apartment in Queens and explained what the words meant.

Her experience in transitioning to a new country — supported by family, friends, and neighbors — inspired her to dedicate her professional life to ensuring that people have the opportunity to pursue lives of dignity and financial independence.

Under her leadership, the Labor Department set new worker protection records through targeted enforcement efforts. The Department also championed comprehensive reform of the nation’s publicly funded job training programs so it can better assist dislocated workers. In addition, Secretary Chao oversaw efforts to update the white collar exemption of the Fair Labor Standards Act, which provided millions of low-wage, vulnerable workers with strengthened overtime protections. For the first time in 40 years, the Department is enforcing the law requiring unions to file annual financial disclosure forms. This gives rank and file members better information about how their dues are spent. To better protect workers, the Department launched a compliance assistance program to help employers and unions understand and comply with the nation’s numerous, complex labor laws.

These accomplishments build on Secretary Chao’s record of public, private, and non-profit sector leadership. Prior to her service as Secretary of Labor, she served as President and Chief Executive Officer of United Way of America. In that position, by initiating fiscal reforms and rebuilding connections with estranged local chapters, she restored public trust and confidence in the nation’s largest institution of private charitable giving, which had been tarnished by previous mismanagement and financial abuse.

As Director of the Peace Corps, Secretary Chao was responsible for establishing the agency’s presence in the Baltic nations of Latvia, Lithuania, and Estonia as well as in several of the newly independent states of the former Soviet Union: Russia, Ukraine, Moldova, and Uzbekistan.

Prior to her service as Director of the Peace Corps, Secretary Chao had been Deputy Secretary at the U.S. Department of Transportation, Chairman of the Federal Maritime Commission, Deputy Maritime Administrator in the U.S. Department of Transportation, and a White House Fellow. Her private sector experience includes serving as Vice President of Syndications at BankAmerica Capital Markets Group and as a banker with Citicorp. Prior to her nomination as Secretary, she was a Distinguished Fellow at The Heritage Foundation.

Secretary Chao earned her M.B.A. from the Harvard Business School and her undergraduate degree in economics from Mount Holyoke College. She has received numerous awards for her professional accomplishments and public service. She is the recipient of 27 honorary doctoral degrees from colleges and universities around the world.

Because of her meritorious public service on behalf of the people of our nation and her commitment to helping those in need, Reverend President, I hereby recommend Elaine L. Chao for the Marquette degree of Doctor of Laws, honoris causa.