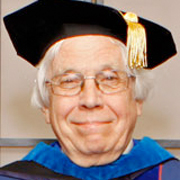 One of the world’s leading scholars on ethics in media and in human dialogue, Clifford G. Christians has taught at the University of Illinois at Urbana-Champaign since completing his doctoral studies in 1974. He has also been a visiting scholar in ethics at Princeton University and the University of Chicago, as well as a Pew Program Fellow at Oxford University.

Over the course of his 30-year career, Dr. Christians has explored the nature and role of ethics and ethical decision-making in the worlds of professional media and human dialogue. He has studied the ethical implications for journalism in democratic societies and analyzed how professional programs in advertising, broadcasting, journalism and public relations teach ethics and the process of ethical decision-making to the next generation of professionals.

With graduate degrees in theology and communication, Dr. Christians has worked to bring the insights from communication research into organized religion and the field of theology. He was part of both Catholic and Calvinist groups of scholars working to integrate communication theory and research into the theological framework of their denominations.

His work — teaching, lecturing and writing — has taken him to more than 25 countries in Europe, Africa, Asia and Latin America as a visiting scholar or distinguished guest speaker. His articles have appeared in French, German and Spanish, and his textbook on media ethics has been republished in Korean.

Dr. Christians has received eight awards for teaching excellence and more than 25 honors and awards for his research on ethics. He has been editor or an editorial board member for more than 25 academic journals in the United States and abroad, and he is listed in Who's Who, Who's Who In The World, International Who's Who and Outstanding Scholars of the 21st Century. Recently he was given an honorary appointment in privacy protection by the Korean National Commission to UNESCO. The Jesuit leaders of the Cavaletti Conferences in Rome invited him to help them integrate theology and communication.

Dr. Christians has been the author, co-author or editor of 12 books and monographs: Responsibility in Mass Communication (1980); Jacques Ellul: Interpretive Essays (1981); Teaching Ethics in Journalism Education (1980); Media Ethics and Church (1981); Media Ethics: Cases and Moral Reasoning (1983); Good News: Social Ethics and the Press (1993), which received the Book of the Year Award from the Religious Speech Communication Association; Communication Ethics and Universal Values (1997) with Rev. Michael Traber, president of the World Association of Christian Communicators; Moral Engagement in Public Life: Theorists for Contemporary Ethics (2002); An Ethics Trajectory: Visions of Media Past, Present and Yet to Come (2008); Media Ethics in Education (2008); Normative Theories of the Media: Journalism in Democratic Societies (2009); Keywords in Critical Cultural Studies (in press); Handbook of Media Ethics (2009); and Ethical Communication: Moral Stances in Public Communication (2009). His newest book, Ethics for Public Communication, will soon be published by the Oxford University Press.

Because of his important contributions to the philosophy of technology, media ethics and communication theory and his commitment to values and ethics, Reverend President, I hereby recommend Clifford G. Christians for the Marquette University degree of Doctor of Letters, honoris causa.