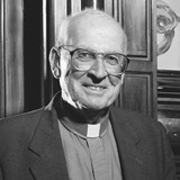 Candidate presented by: Dr. Ruth Howes, Professor and chair of the Department of Physics

Rev. George V. Coyne, S.J. has served as the director of the Vatican Observatory (Specola Vaticana) since 1978. Under his leadership, the Vatican Observatory expanded from its traditional base at Castel Gandolfo south of Rome to a second site on Mount Graham in Arizona where the Vatican Advanced Technology Telescope (VATT) is located. This innovative 1.8 meter instrument was the first large telescope to use a mirror created by spinning molten metal in ceramic molds. Father Coyne and the observatory staff are currently in the process of constructing

Father Coyne entered the Society of Jesus in 1951 and was ordained a priest in 1965. He completed a bachelor's degree in mathematics and a licentiate in philosophy at Fordham University in 1958 and earned a Ph.D. in astronomy from Georgetown University in 1962. In 1966 he obtained a licentiate in theology from Woodstock College in Maryland. He has received honorary degrees from Saint Peter's University, Loyola University Chicago, and the University of Padua in Italy.

A distinguished astronomer, Father Coyne has studied the interstellar medium, stars with extended atmospheres and Seyfert galaxies by using the polarization of light from these objects. He is currently applying polarimetry to the study of cataclysmic variables and taking advantage of the high resolution images produced by the VATT to search for the disks of dust and gas that surround very young stars and are believed to be the birth places of planets. His research has been published widely in the scientific literature.

Father Coyne founded the Vatican Observatory Summer Schools, the alma mater of more than 200 young astronomers from 50 nations. He is active in several scientific professional societies, including the International Astronomical Union and the American Astronomical Society. Since 1966 he has been associated with the Astronomy Department at the University of Arizona and served for several years as an administrator of the various astronomical observatories at that university. He still spends a semester each year in Arizona conducting research and teaching. Recently, he organized a series of conferences inviting serious scholars to address topics where philosophy, theology, and the natural sciences converge.

Father Coyne exemplifies a life in which faith and science become interwoven. When he looks into the skies he sees the hand of God at work. As a scientist he shares this integration of faith and reason in ways that both the general public and the scientific community can appreciate and embrace.

Because of his leadership in astronomy and his role in clarifying the role of science in supporting faith, Rev. George V. Coyne is commended for the Marquette University degree of Doctor of Science honoris causa.