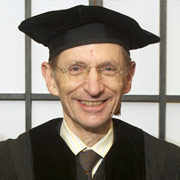 William Drayton is the founder of Ashoka: Innovators for the Public, a foundation dedicated to supporting and linking individuals who create positive, sustainable, innovative solutions for daunting social challenges. Ashoka‘s mission is to build a collaborative, global “citizen sector” that fosters society and world-changing ideas, led by individuals aptly named social innovators and social entrepreneurs.

After receiving his Master of Arts degree from Oxford University and his law degree from Yale University Law School, Mr. Drayton combined his interests of economics, law, and management to work in public policy. He then founded Ashoka in 1980 with an annual budget of $50,000. The first class of Ashoka Fellows – social entrepreneurs leading innovative solutions to break cycles of dependency and increase human capability around the world – was elected the next year. Today Ashoka employs 300 staff, has a budget exceeding $40 million, operates in 35 regional offices around the globe, and supports the work of nearly 3,000 Fellows in more than 70 countries.

Mr. Drayton and Ashoka’s programs invest in the potential of young adults gaining experience as agents of positive social change during their formative youth years, as evidenced by Ashoka’s Youth Venture initiative and Ashoka U.

This past year Marquette University was selected (with Duke and Arizona State Universities) as one of only ten “Changemaker Campuses” that are considered key members of Ashoka’s global network and community. Marquette’s selection played a role in the Office of the Provost’s Social Entrepreneurship Initiative, an ongoing cross-campus, interdisciplinary exploration that includes introducing social innovation as a tool for engaged learning and framework for life, as well as a regional convening role in social innovation.

Mr. Drayton has received extensive recognition for his visionary leadership in social innovation and social entrepreneurship. Recently he was honored with an honorary Doctor of Humane Letters from Yale University; named a Preiskel-Silverman Fellow for Yale Law School; and received Yale School of Management’s annual Award for Entrepreneurial Excellence. Additionally, he has received the National Public Service Award and the Public Service Achievement Award. In 2005 he was selected one of America’s Best Leaders by U.S. News & World Report and, in 2006, was named one of Harvard University’s 100 “Most Influential Alumni.”

The wide-ranging, positive social value generated by Ashoka and its social entrepreneurs is beyond comprehension. Indeed, millions of lives – often the most vulnerable and impoverished – have been positively impacted, demonstrating high alignment between increased human capability as a key outcome of social innovation and Marquette’s Jesuit mission and identity.

As Mr. Drayton has observed, “When it comes to systemic change and attacking root causes of social problems, it’s more than just teaching a man to fish . . . it’s about creating new fishing industries.”

Reverend President, because he embodies the Marquette motto "Be the Difference” and has devoted his life to equipping thousands of others who seek to do the same, serving as a leader in the global fields of social innovation and social entrepreneurship, I hereby recommend William Drayton for the Marquette University degree of Doctor of Laws, honoris causa.