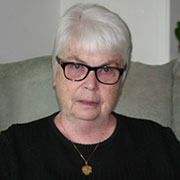 Sister Ann Durst of the Society of the Holy Child Jesus is the founder of the Casa Cornelia Law Center in San Diego, California. Casa Cornelia serves individuals seeking asylum and has recently expanded its services in this time of great concern for migrants and refugees.

Sister Ann, who earned her master’s degree in theology from Marquette in 1971 and her law degree from Georgetown in 1982, has a long history of service in education and law. Sister Ann served as President of Rosemont College in Rosemont, Pennsylvania from 1971 to 1978.

In 1992, Sister Ann and Sister Mary Wayne Gradon founded the Casa Cornelia Law Center. Sister Ann likes to quip that the Center began as “two nuns in the basement of a condo” who raised $15,000 during their first year. Twenty-five years later, Casa Cornelia has an annual budget of more than $2 million, with lawyers on staff as well as attorneys who offer services pro bono. Casa Cornelia also has 30 staff members as well as a network of hundreds of volunteer attorneys, interpreters, translators, law students, and community volunteers.

Casa Cornelia’s primary commitment is to provide quality legal services to victims of human and civil rights violations. Aspiring to educate others about the real-life impact of immigration law on the community and the public good is a major focus of Casa Cornelia. The mission and spirit of Casa Cornelia is rooted in the tradition of service of the Society of the Holy Child Jesus and that of its founder, Cornelia Connelly. Sister Ann continues to uphold this tradition. She believes that “the work with the immigrant community is to enable people to live the life that they should lead, which is a fuller life, a safer life.”

Sister Ann’s success in helping others live a fuller, safer life cannot be overstated. Since Casa Cornelia first opened its doors, more than 15,000 children, women, and men have received essential legal assistance and humanitarian protection. Casa Cornelia’s reach continues to expand. Last year alone, Casa Cornelia was responsible for training hundreds of volunteer attorneys in all core legal practice areas. In addition, the program recruited, trained, and mentored volunteer interpreters and translators to assist individuals who speak more than 40 languages from around the world, including Russian, French, Creole, Mam, Somali, and Arabic. Sister Ann says that she thinks of the work of Casa Cornelia “as a beacon of hope in a sea of pain and suffering. There are so many needs, and these folks are so vulnerable.”

Because of her commitment to education, service, and the shared humanity of those most in need, President Lovell, I hereby recommend Sister Ann M. Durst, Society of the Holy Child of Jesus, for the Marquette University degrees of Doctor of Laws, honoris causa.