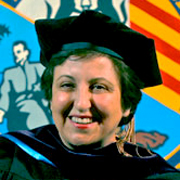 Dr. Shirin Ebadi is renowned for her courageous and unflagging efforts as a lawyer, writer, lecture, and activist. She was the first Iranian and first Muslim woman to receive the Nobel Peace Prize in 2003. The Norwegian Nobel Committee honored Dr. Ebadi for her pioneering work for democracy and human rights, tirelessly advocating on behalf of women and children.

Born in Iran in 1947, Dr. Ebadi was raised in a family that valued education, encouraging all the children, boys and girls, to further their studies. She attended Tehran University, earning her law degree in 1968. Following a six-month apprenticeship, she was seated as the first female judge in Iran in 1969. She completed a doctorate with honors in private law from Tehran University in 1971 and in 1974 became the president of the Tehran City Court.

As a result of the 1979 Islamic Revolution in Iran, Dr. Ebadi and other female judges were demoted from their judicial posts. Unwilling to tolerate such treatment, she requested early retirement. After several years of fighting for the right to open her own legal practice, Dr. Ebadi finally realized her goal in 1992, actively and publicly promoting the rights of refugees, women and children.

With Islam as her spiritual wellspring, Dr. Ebadi campaigns for peaceful solutions to social problems and promotes new thinking on the application of Islamic principles and practices in the contemporary world. She has displayed great personal courage as an attorney, defending individuals and groups who have fallen victim to a powerful political and legal system that has been legitimized through an extremist and inhumane interpretation of Islam. Dr. Ebadi has shown a consistent willingness and ability to cooperate with representatives of secular and religious groups of many kinds in the quest for human rights.

Dr. Ebadi is the author of numerous books and articles on human rights. Her memoir, Iran Awakening: One Women’s Journey to Reclaim Her Life & Country, was published in 2006 and subsequently named one of the “Best Books of the Year” by The Washington Post Book World. Her most recent book, Refugee Rights in Iran, was published in 2008 and is a comprehensive look at the legal experiences of displaced people in light of Iranian and international law. She continues to be a voice of hope to those experiencing oppression through her work with the Center for the Defense of Human Rights, an organization she co-founded in 2001. The center’s goals are to document human rights violations in Iran, provide legal counsel to political prisoners and support the families of those prisoners.

Dr. Ebadi is a woman of faith who believes in the inherent dignity of every human being. She has faced imprisonment, oppression and assassination attempts, and yet she continues to speak for those who have been silenced. She has defended many high-profile criminal and social cases and spent time in solitary confinement for activities deemed anti-government. Her commitment to the promotion of human rights and her unfailing courage in the face of harm are extraordinary. It is a true honor to welcome Dr. Shirin Ebadi to Marquette University.

Because of her exemplary career as lawyer, judge, write, and activist on behalf of our human family, Reverend President, I hereby recommend Shirin Ebadi for the Marquette University degree of Doctor of Laws, honoris causa.