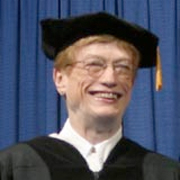 Sister Maureen A. Fay, OP, President of the University of Detroit Mercy, is a distinguished leader in American Catholic and Jesuit higher education. When in 1990 the Jesuit-sponsored University of Detroit consolidated with nearby Mercy College, the new President chosen was neither a Jesuit nor a Sister of Mercy but a member of the Adrian Dominican religious community.

That choice proved wise indeed, for the leadership of the University of Detroit Mercy by Sr. Fay during the past fourteen years has been widely recognized as truly gifted and capable. She is retiring as President at the end of the present academic year.

Since becoming President of the University of Detroit Mercy, she has focused her attention on the growth and revitalization of that institution, Michigan's largest, most comprehensive Catholic university with an enrollment of approximately 6,000 students. An important theme of her administration has been a sustained effort to develop urban partnerships wherever the academic pursuits of the university and the needs of the surrounding community found intersection.

In assessing the university's performance, she at one point remarked, "Even though our graduates have gone on to become corporate executives, elected officials, civic and community servants, teachers, attorneys, health care providers, engineers, entrepreneurs, scientists, architects, and noted professionals in every field, that is not the truest measure of our success. The truest measure of our success is that we are making a substantive and positive difference in our world through the lives of our students, our faculty, our staff, and our graduates."

After a successful and varied career in teaching and school administration, she served as President of Mercy College from 1983 to 1990, the-first person not a member of the Religious Sisters of Mercy to hold that position. She also has been a member of the boards of Rockhurst College in Kansas City, the University of St. Thomas in Saint Paul, and the Association of Jesuit Colleges and Universities.

She is also active in many Detroit area community and civic organizations as well as with a number of educational organizations. Among these are the Detroit Chamber of Commerce, the Greater Downtown (Detroit) Partnership, New Detroit, and the boards of two Fortune 500 companies: Bank One and Kelly Services. She has earned various awards from civic and non-profit organizations such as the Salvation Army, the National Conference for Humanity and Justice, and Alternatives for Girls.

Marquette University is proud to recognize and celebrate Sister Fay's gifts as an educator and leader. Because of her many contributions to Catholic and Jesuit higher education and because of her abiding commitment to improving our society, Reverend President, I hereby recommend Maureen A. Fay, OP, for the Marquette Degree of Doctor of Letters, honoris causa.