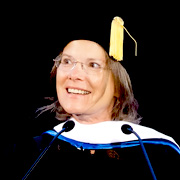 Carolyn Forché is a Detroit native who has become a citizen of the world. As a poet, anthologist, essayist, and professor, she has broadened the vision of American poetry as she unflinchingly explores the often-traumatic lived experience of twentieth and twenty-first century history. Currently Ms. Forché directs the Lannan Center for Poetics and Social Practice at Georgetown University.

Ms. Forché’s first book, Gathering the Tribes, was chosen for the 1975 Yale Younger Poets Series. Published when she was just 24, this book already shows an awareness of large-scale forces and their potentially catastrophic effects on individuals and “tribes.” In 1977 Ms. Forché began translating the poetry of the Salvadoran-exiled poet Claribel Alegria, which made her aware of the political situation in El Salvador. When she was awarded a John Simon Guggenheim Foundation fellowship, she chose to go to El Salvador, where the government was engaged in widespread human rights violations. Called to activism, Ms. Forché began working closely with Rev. Ignacio Ellacuria, S.J., Rector of Central American University, who later became one of six Jesuits martyred for his advocacy work. Her experiences inspired her to expand her reach as poet, not into ideological political realms but into what she calls “the social”: the sphere where politics intersects with intimate human relations.

Throughout her career, Ms. Forché has balanced poetry and translation projects with human rights activism, often blurring the line between the two. Her second book, The Country Between Us, recounts what she witnessed in El Salvador, speaking with elegant precision about the unspeakable. The Country Between Us received the Alice Fay Di Castagnola Award, was a Lamont poetry selection in 1981, and is still considered a landmark event in American letters. Her 1991 collection, The Angel of History, received the Los Angeles Times Book Critic Award; and her most recent collection, The Blue Hour, was a finalist for the National Book Critics Circle Award. In addition, she has translated Alegria’s Flowers from the Volcano and Sorrow, The Selected Poems of Robert Desnos (with William Kulik), and Mahmoud Darwish’s Unfortunately, It Was Paradise (with Munir Akash). She also edited Against Forgetting: Twentieth Century Poetry of Witness. Against Forgetting compiles work written by poets swept up in the bloodiest conflicts of the twentieth century - from the 1915 Armenian genocide to the 1989 suppression of Chinese democracy - and it was praised by Nelson Mandela as “a blow against tyranny, against prejudice, against injustice."

The Lannan Center’s mission keeps Ms. Forché at the cutting edge of American poetry as a social practice. At Georgetown, she oversees a lively mix of students, visiting writers, outreach programs, and symposia, all concerned with promoting what the Center’s website calls “the plural forms of culture and the advance of cultural freedom in the world today.” There are elements within American culture that want to push poetry to the sidelines, but Forché has refused to be marginalized. As her work as a poet, translator, and anthologist amply demonstrates, poetry has long been among the most powerful weapons in the global war against silence and against forgetting.

Because of her lifelong commitment to the poetry of witness, Reverend President, I hereby recommend Carolyn Forché for the Marquette University degree of Doctor of Letters, honoris causa.