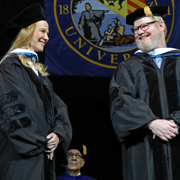 Jeannie Noth Gaffigan and Jim Gaffigan, recently described in Vanity Fair magazine as “Comedy’s Quietest Power Couple,” have combined their exceptional and complementary talents for more than fifteen years to create multiple venues that bring people cheerful laughter and genuine insight into the complexity of the human condition.

Working together they have created several critically acclaimed television programs: in 2006 the comedy special Beyond the Pale: Jim Gaffigan, a program that achieved platinum sales for both CDs and DVDs; in 2009 King Baby, in 2012 Mr. Universe, and Obsessed in 2014, which earned a nomination for Best Comedy Album at the 2015 Grammy Awards. In 2014 Jim Gaffigan became one of only ten comics to sell out Madison Square Garden. Earlier that same year, he had the honor of performing for Pope Francis and the more than one million attendees at the Festival of Families in Philadelphia.

In 2017 Jeannie and Jim produced their fifth successful Netflix comedy special called Jim Gaffigan: Cinco. As a clear testimony to their success, Netflix purchased the exclusive rights to their previous four stand-up specials.

In 2013 they began work on what became a victorious TV Land comedy, The Jim Gaffigan Show, critically acclaimed as one of television’s bright spots and which could have continued for additional seasons. However, because of the unrelenting demands on their time and energy that the show required, with Jeannie as executive producer of all twenty-two episodes, they made the admirable decision after two seasons to conclude the series so that they could be the kind of attentive parents they wanted their five young children to have. This devotion continues to be manifest in their decision to bring all their children with them whenever possible when they must travel.

Television comedies, however, have not been their sole occupation. Their literary talents also found expression recently when they co-wrote two of Jim Gaffigan’s best-selling books, Dad Is Fat and FOOD: A Love Story, with both volumes skillfully bringing out the humor from seemingly mundane situations of daily life, often with touching insights into the challenges and rewards of family life. With each passing year, their audiences have grown both in appreciation and in numbers, reaching literally millions of people of all ages in multiple countries in Asia and Europe. Their work continues to have a global impact. The streaming site Pandora recently announced that Jim Gaffigan is the most popular comic among its users with more than 700 million plays to date. Together they have lifted the spirits of literally millions of people with their creative gifts.

Although best known for their comedy, both Jeannie and Jim continue to pursue acting in television and films, in roles both comedic and serious. Their fine acting talents are increasingly recognized and in demand in an intensely competitive entertainment industry. Jeannie is a 1992 graduate of Marquette’s Diederich College of Communication, and we are proud to claim her as a distinguished alumna.

Because of their extraordinary success and contributions as a couple to the worlds of comedy, theatre, television, and cinema, and their dedication to their work and to each other, to their children, and to their Catholic faith, President Lovell, I hereby recommend Jeannie Noth Gaffigan and Jim Gaffigan for the Marquette University degrees of Doctor of Humane Letters, honoris causa.