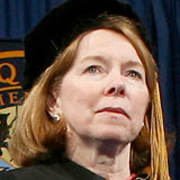 Kathleen Huston believes that libraries have the power to change lives. As the former City Librarian for the City of Milwaukee, she has not only seen the contributions that libraries can make to literacy, education, jobs, lifelong learning, and the greater good, but she has actively worked to inspire these changes and contributions within the public library system and within the greater Milwaukee community at large.

Ms. Huston’s career with the Milwaukee Public Library System (MPLS) began in 1969, shortly after she graduated from the University of Wisconsin-Madison. During her tenure with MPLS, she worked in several different branches and departments, including her years as branch manager of the Llewellyn and Mill Road libraries, Central Library’s Humanities Coordinator, Assistant City Librarian, and finally, City Librarian, a position she held from 1991 until her retirement in 2006.

The years under Ms. Huston’s guiding hand were marked by many changes for the library system and its services. Not only did she oversee the renovations of the Central Library building and several neighborhood libraries, but she directed the construction of two new libraries within the MPLS network. She was also instrumental in initiating the electronic conversion of the card catalogue and the introduction of computers into Milwaukee libraries. She ushered the library system into the electronic information era with a keen eye for anticipating the needs and desires of library patrons. By providing both free Internet access and free computer education classes to the public, instituting a library website, and establishing MPL as the first public library in Wisconsin to offer wireless access to its patrons, Ms. Huston left a lasting legacy in the way Milwaukee citizens are able to access library resources and information in the digital age.

Soon after her appointment as City Librarian, Ms. Huston embarked upon a series of initiatives designed to increase literacy in the Milwaukee community. Some programs sought to improve adult and minority literacy, “Milwaukee Reads” and “Read About Me”, for example, while others focused on children and literacy. Introducing children to the library is a special priority for Ms. Huston, and many of her programs have been geared toward improving literacy in children, enhancing library service for developmentally challenged youth (“Learning for All”), and developing early literacy awareness through cooperative partnerships which provide educational resources to child care providers (“Books2Go”).

Over the years Ms. Huston has also played a large role in the business community of Milwaukee. Her partnerships with the Business Journal as well as other large employers resulted in both the “Business Breakfast” series and “Innovators, Experts, and Entrepreneurs” programs, which have served to increase awareness of the role MPL is able to play in providing networking opportunities and other resources to businesses, professionals, and prospective small business owners. These partnerships with local businesses have also provided funding for other community/library programs, including a venture which led to MPL’s 2007 award from the Public Policy Forum for providing free computer classes (in English and Spanish) to the public.

Ms. Huston has also been the recipient of the 2006 Public Policy Forum Salute to Local Government Norman N. Gill Award for Individual Excellence, the 2003 Distinguished Alumna Award from Edgewood College, the 1999 “It Takes a Whole Village” award from the Milwaukee Community Journal newspaper, and the 1995 Wisconsin Library Association President’s Award, each in recognition of her efforts to transform MPL into the valuable community resource that it is today. She has also worked tirelessly with local government officials to offer counsel on the challenges that have faced Milwaukee in recent years, lobbying for increased resources and services to improve the library’s technology, maintain or increase hours of operation, and preserve the library system for the Milwaukee area and its residents.

For Kathleen Huston, libraries have the power to change lives. For the citizens of Milwaukee, Kathleen Huston embodies that power, and she has changed the lives of countless numbers. Because of her excellent work with the Milwaukee Public Library and the entire Milwaukee community, Reverend President, I hereby recommend Kathleen Huston for the Marquette University degree of Doctor of Letters honoris causa.