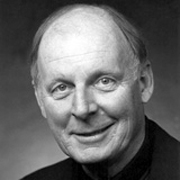 Rev. Leland E. Lubbers, S.J., is the founder and first president of Satellite Communications for Learning, a corporation more commonly known as SCOLA. This international satellite network based near McClelland, Iowa, retransmits via satellite and the Internet television news and entertainment broadcasts from more than 80 different countries in 70 languages to colleges, universities, and language schools throughout North America.

A Milwaukee native and 1946 graduate of Marquette University High School, Father Lubbers was ordained a priest in 1959. After his Jesuit training he earned a doctorate in fine arts at the University of Paris–The Sorbonne in 1963, and in 1964 he established the Fine Arts Department at Creighton University, where he served as its chairman until 1972 and continued his scholarly activities as Professor until 1989.

Early on Father Lubbers, as an artist, generated a great deal of discussion in the art world with his large kinetic sculptures. These welded-steel pieces, incorporating objects from junkyards, were essentially machines with no function. For Father Lubbers their comic dimension revealed how life itself, as a mystery, is essentially comic. “There is nothing so comic as man wildly plummeting toward the unknown,” he says. His avant-garde work gained widespread critical appreciation and went on display in museums across the country from Florida to Seattle, where one of his pieces graced the 1967 Seattle Opera production of “Fidelio.”

In 1981 Father Lubbers’ attendance at a dealer show for satellite television receiver-only systems proved to be a turning point in his life. Enthralled with how distant countries and cultures were made immediately present through satellite dishes, he bought a display model, installed it on his sculpture lab roof, and started to download programs from satellites in space. By the following year Creighton students in the residence halls were put in direct television contact with peoples and cultures of far away lands. And in the spring of 1983 Father Lubbers, joined by a free-lance engineer, Mr. Francis Lajba, invited representatives from the biggest universities across the country to consider the possibilities of this developing technology, Thirty-five attended, and within 15 minutes SCOLA was born.

Since for Father Lubbers the fundamental purpose of art is communication and bringing people together, for him nothing was more logical than his transition from an artist working in steel to working in radio waves, the most powerful means today of bringing people of diverse cultures together and allowing them to experience their common humanity. Reflecting on how Father Lubbers and Mr. Lajba first developed a computer program to help track Russian satellites, Richard Cooper of SPACE Pacific, a pioneer in satellite technology, contends, “It is not an overstatement to note that Father Lubbers, motivated by something only he can explain, provided a significant and pivotal bit of technology that allowed America as a nation to reassess the true nature of the Russian ‘menace.’”

Because of his remarkable spirit of exploration in the tradition of Father Jaques Marquette, and his even greater passion for and contribution to the unification of peoples all over the world through the work of SCOLA, Reverend President, I hereby recommend Reverend Leland E. Lubbers of the Society of Jesus for the Marquette University degree of Doctor of Science, honoris causa.