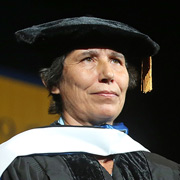 Sister Maria Marciano, a Dominican nun from Brazil with degrees in civil and hydrology engineering, has dedicated her life to serving the poorest of the poor in the Dominican Republic and Haiti.

For the past twenty-five years, Sister Maria has worked with the destitute in Vallejuelo, a city and region of the San Juan Diocese in the Dominican Republic. In Vallejuelo she established her by-now widespread reputation as an effective builder and servant of those in need. Her many building projects include constructing roads, water systems, homes, schools, community centers, agricultural educational institutions, and productive farming cooperatives. These provide water for drinking and irrigation, places for educating children and adults, buildings for dispensing over-the-counter medicines, centers for marketing crafts, farms for demonstrating modern agricultural methods, and warehouses for storing and marketing agricultural products. These successful Vallejuelo projects became the model and basis for her work in Haiti after the 2010 earthquake and cholera outbreak in that nation.

Sister Maria has constructed over 200 miles of roads in the Dominican Republic and Haiti, connecting various communities with one another and reaching the clean water supplies in the mountains. Developing water systems was and continues to be her first priority after the roads are completed. In the mountains she built dams and forty-three cisterns that channel clean water for drinking to 160,000 people and for irrigating 100 farms.

Sister Maria has also built four schools that serve more than 700 children; she has just finished constructing an eighteen-classroom school in Tiroly, Haiti, that will serve another 540 students. She has built one community center and is planning six others in the next five years. These centers are places for dispensing needed over-the-counter medicines; for educating of adults in literacy and nutrition; and for holding meetings with the local communities.

Most successfully Sister Maria has developed an agricultural formation center in Vallejuelo, Dominican Republic, and has finished constructing another in Los Cacaos, Haiti. At the Vallejuelo center the Dominican sisters, with the help of local residents, grow vegetables for local consumption and for marketing, demonstrating and teaching how to double and triple crop production by using irrigation and modern technology. Irrigated greenhouses grow multiple vegetable plants and trees from seeds. The centers, moreover, serve as meeting places for farmers and for a farmer’s cooperative that Sister Maria formed to unite the farmers of the area for better collective bargaining to get a fair price for their products. As head of the cooperative, she signed a favorable contract with Frito Lay to sell her potatoes and those of other farmers in the Vallejuelo area. The agricultural formation centers become places for learning how to market as well as how to grow cash crops.

Because of her commitment to social justice and service to the poorest of the poor, President Lovell, I hereby recommend Sister Maria Marciano of the Order of Preachers for the Marquette University degree of Doctor of Humane Letters, honoris causa.