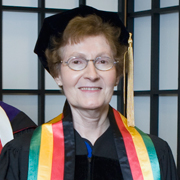 Candidate presented by: Mr. Terence Miller, Director of the Office of International Education

That same year Sister Janice was assigned to Kenya where she served as Communications Coordinator for the Catholic Church. In Kenya she was responsible for training journalists and broadcasters, setting up diocesan newspapers, producing radio and television programs, and drafting public statements for bishops. In 1977 she was sent to what was then Rhodesia to serve as Press Secretary of the Catholic Commission for Justice and Peace. Documenting the atrocities of Ian Smith’s government before its collapse led to Sister Janice's arrest, imprisonment, and deportation after only three months. Her work was compiled and collected into a publication called Rhodesia, the Propaganda War that was published by the Catholic Institute for International Relations in London and the American Committee on Africa in New York.

After her deportation she worked with the Washington Office on Africa, and in 1979 she became the Projects Officer for the Zimbabwe Project, a new initiative set up by a consortium of Catholic donors to assist refugees from the war in Rhodesia. After Zimbabwe gained independence in 1980, Sister Janice was invited by the independent government of Zimbabwe to work as education consultant in the President's Office. In that capacity, she helped to build nine schools for former refugees and war veterans and developed a new system of education which linked academic subjects with technical training. Education with Production in Zimbabwe: the Story of ZIMFEP is the title of a book she wrote with others to describe this experiment.

In 1991 Sister Janice returned to Maryknoll, New York to work as Communications Coordinator. Six years later she was back in Zimbabwe and became the training coordinator for Silveira House, a leadership training and development education center run by the Jesuits for the economically poor and marginalized. She continued to live in Zimbabwe until 2009, where she chaired the African Forum for Catholic Social Teaching, an association of justice and peace practitioners throughout East, Central and Southern Africa. She also chaired the Counseling Services Unit, a group of doctors and counselors who assist the victims of violence in Zimbabwe.

Throughout all the success and hardship Sister Janice has experienced in her international work, she has earned a reputation for perseverance. "I've learned that to persevere and not lose hope is possible only through a deepening of faith in God's goodness and presence," she says. "We must not be disheartened by human failure."

Sister Janice earned a doctorate in religious studies from the University of Zimbabwe in 1992. Her thesis, On the Frontline, Rural Catholic Missions and Zimbabwe's Liberation War, was published in 1995. She is co-author of an Advocacy Training Manual, used throughout Zimbabwe to train local communities to lobby for changes in policies that affect their lives. Her latest book, Ostriches, Dung Beetles, and other Spiritual Master: A Book of Wisdom from the Wild, was published by Orbis Books in 2009.

Because of her tenacious commitment to a just world, her steadfast solidarity with the economically poor and marginalized, her strong belief in women’s access to education, and her life work of giving voice to the voiceless, Reverend President, I hereby recommend Sister Janice McLaughlin of the Maryknoll Sisters for the Marquette University degree of Doctor of Religious Studies, honoris causa.