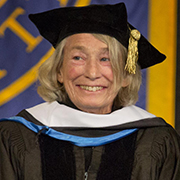 Mary Oliver’s poetry, with her lyrical connection to the natural world, has firmly established her in the highest realm of American poets. She is renowned for her evocative and precise imagery, which brings nature into clear focus, transforming the everyday world into a place of magic and discovery. As poet Stanley Kunitz has said, “Mary Oliver’s poetry is fine and deep; it reads like a blessing. Her special gift is to connect us with our sources in the natural world, its beauties and terrors and mysteries and consolations.” Oliver has received countless distinctions, including the Pulitzer Prize and National Book Award, and continues to influence generations of younger poets, as well as adding to her legions of loyal readers with each eagerly awaited new book.

Oliver was born in Ohio in 1935. She attended Ohio State University and Vassar College, then a women’s college. As a young writer, strongly influenced by the work of the poet Edna St. Vincent Millay, she wrote to the late poet’s sister and was invited to visit. For the next several years, Steepletop, St. Vincent Millay’s country house in upper state New York, became her second home. Subsequently, Oliver moved to New York City, then visited England for one year. In 1964, she returned to the United States. During the past two decades, she has taught at various colleges and universities: Case Western Reserve, Bucknell, Sweet Briar College, the University of Cincinnati and Bennington College in Vermont.

Mary is a major literary figure whose past honors include a Guggenheim fellowship and the Poetry Society of America's Shelley Memorial Award, among others. Since 1965, she has published many acclaimed volumes of poetry and prose, including her most recent collection, A Thousand Mornings. Perhaps most significantly, though, she has achieved a rare distinction among poets: her work is genuinely popular. People—and not just English majors—read Mary Oliver. Her poems are broadly appealing because, rather than articulating a narrowly autobiographical version of the self, they expand outward into the natural world that we share. To read an Oliver poem is to encounter swamps, hoof-prints, herons, stars and bears. Such images coax us to the edge of the sacred, without defining it for us. Instead, we are asked to contemplate: “Is the soul solid, like iron?” “Who made the grasshopper?” “Tell me, what is it you plan to do with your one wild and precious life?”

As a Jesuit institution, Marquette University is steeped in Ignatian spirituality, and Mary Oliver’s work resonates with this contemplative tradition. We admire her achievements, but we also admire the example she sets as a spiritual guide, seeker, and risk-taker. In gratitude for her work, its reach and its profundity, Reverend President, I hereby recommend Mary Oliver for the Marquette University degree of Doctor of Letters, honoris causa.