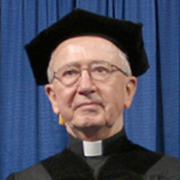 The First Jesuits (1993), a revolutionary study of the early Society of Jesus, remains his most famous work, now translated into five languages. It received the 1995 Jacques Barzun Prize of the American Philosophical Society and the American Society of Cultural History’s 1996 Philip Schaff Prize for Religious History. According to one reviewer, “The First Jesuits is an account which manages to keep in touch with the hagiographical narratives of the past, while transcending them in the direction of real historical understanding.” In it Fr. O’Malley, after the manner of St. Ignatius himself, gives evidence of how, precisely through the historically conditioned, limited theological understandings of Ignatius and the first Jesuits, God works incarnationally and sacramentally within the Church.

After expressing amazement at the sheer amount of research in so many different languages, a reviewer of his latest book, Trent and All That: Renaming Catholicism in the Early Modern Era (2001), concludes that the “judicious insights in all his work remain a model for many historians.” In his recent festschrift, Professor Benjamin Westervelt writes, “Whatever the format, a class taught by O’Malley is a microcosm of his scholarship and contains the same essential characteristics: a tremendous amount of material, a judicious balance between the broad theme and the richly evocative anecdote, and of course, a lively sense of humor.”

When recently asked why it is important for Jesuits to engage in research, writing, and scholarship, he responded, “Books influence people, and if they are important books, they can influence a whole culture. I believe in the power of ideas, which is what scholars deal with. Through the results of their scholarship, scholars help us to see things differently, help us break out of our narrowness, help us ask questions that break the logjam of our predicaments. Even aside from the universities, I maintain, it’s essential that some priests be capable of holding their own with the intelligentsia if the Church’s message is to maintain credibility. I think that’s what the Society of Jesus is particularly called to do.”

Because of his outstanding service as scholar and priest to both the Church and the wider world for so many years, Reverend President, I hereby recommend Rev. John W. O’Malley, of the Society of Jesus, for the Marquette Degree of Doctor of Religious Studies, honoris causa.